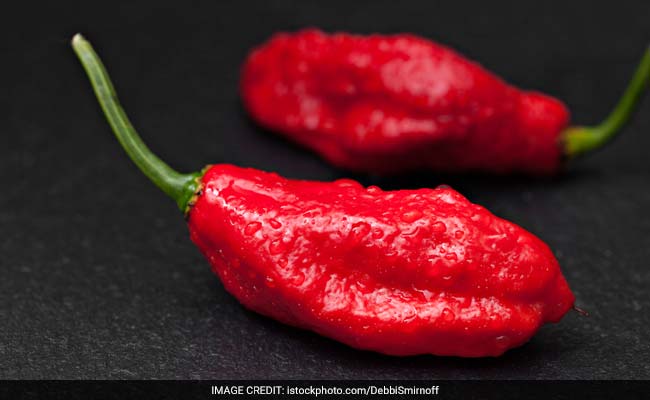 The man was attempting to eat a hamburger with a ghost pepper puree when he burned his esophagus.

A ghost pepper's heat is described in terms normally reserved for carpet bombings. Its heat is measured at 1 million units on the Scoville scale, a per-mass measure of capsaicin - the chemical compound that imbues peppers with heat - that until recently was a world record. Peppers that pass the 1 million mark are called superhot; as a rule they are reddish and puckered, as though one of Satan's internal organs had prolapsed. To daredevil eaters of a certain stripe, the superhot peppers exist only to challenge.

When consumed, ghost peppers and other superhots provoke extreme reactions. "Your body thinks it's going to die," as Louisiana pepper grower Ronald Primeaux told the AP in October. "You're not going to die."

But, demonstrated by a rare though severe incident reported recently in the Journal of Emergency Medicine, superhot peppers can cause bodily harm. A 47-year-old man, unnamed in the case study, attempted a super-spicy feat - eating a hamburger served with a ghost pepper puree - and tore a hole in his esophagus.

Ghost peppers were first grown in India, where they are known as bhut jolokia. A seed from the pepper can cause a mouth to smolder for up to a half-hour. On YouTube, faces broken by the "ghost pepper challenge" devolve into tears, runny noses and hiccups.

The Washington Post's Tim Carman described eating a pea-sized chunk of the pepper, sans seeds, in 2012. "It was as if my head had become a wood-burning oven, lighting up my tongue and the interior of my skull," he wrote. "Milk provided little relief, until the burn began to subside on its own about 10 minutes later."

A bell pepper, for reference, is zero units on the Scoville scale; a jalapeno falls between 2,500 and 8,000 units; a habanero is about a half-million; a pepper called the Carolina Reaper holds the Guinness record at 1.5 million units; police pepper spray clocks in at 5 million Scoville units.

Primeaux, who hopes to claim the world's hottest title through cultivating his Louisiana Creeper variety, said, "When you put one of these in your mouth, it's a whole 'nother ballgame," in his interview with the AP. "A bear is chasing you. You've just been in a car wreck. You just got caught speeding, and a cop is giving you a ticket."

For the 47-year-old man whose esophagus was damaged, though, ingesting the pepper burger was less a bear chase and closer to an attack. As physicians at the University of California at San Francisco reported in the case study, he consumed the burger and attempted to quench the heat in his mouth with six glasses of water. When that failed the man began to vomit, which gave way to abdominal pain. He dialed emergency help.

At the emergency department, he received Maalox and painkillers. After his condition worsened, doctors moved him to the operating room, where they discovered a "2.5-cm tear in the distal esophagus," about one inch, as the case report authors noted. The force of the vomiting and retching led to a rare diagnosis of Boerhaave's syndrome; these spontaneous tears in the esophagus can be fatal if they are not diagnosed and treated.

In this case, surgeons were able to repair the man's throat. "He remained intubated until hospital day 14, began tolerating liquids on hospital day 17," they wrote, "and was discharged home with a gastric tube in place on hospital day 23."

The researchers concluded the case study with a warning.

"Food challenges have become common among social media, including the infamous cinnamon challenge," they wrote, referencing the spice fad that was popular in early 2012. (When eating a heaping spoonful of cinnamon went wrong, it led to emergency calls and at least one collapsed lung.)

"This case serves as an important reminder of a potentially life-threatening surgical emergency that was initially interpreted as discomfort after a large spicy meal."