'Have Never Been Prouder of Him', Says James Foley's Family on Facebook 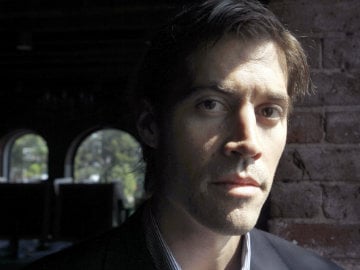 Washington, United States: A grisly video shows Islamic State militants beheading American journalist James Foley, US officials said, in what the extremists called retribution for recent US airstrikes in Iraq. The militants threatened to kill another captive they also identified as an American journalist.

After the video was released Tuesday, Foley's family separately confirmed his death in a statement posted on a Facebook page that was created to rally support for his release, saying they "have never been prouder of him."

"He gave his life trying to expose the world to the suffering of the Syrian people," said the statement, which was attributed to Foley's mother, Diane Foley. She implored the militants to spare the lives of other hostages. "Like Jim, they are innocents. They have no control over American government policy in Iraq, Syria or anywhere in the world."

The statement was posted on a Facebook page called "Find James Foley," which his family has used a number of times since his November 2012 disappearance. Earlier Tuesday, a red-eyed but gracious Diane Foley said the family would not make an immediate statement when approached at her home by an Associated Press reporter. A priest arrived at the home several hours later.

Foley, a 40-year-old journalist from Rochester, New Hampshire, went missing in northern Syria while freelancing for Agence France-Presse and the Boston-based media company GlobalPost. The car he was riding in was stopped by four militants in a contested battle zone that both Sunni rebel fighters and government forces were trying to control. He had not been heard from since.

The video released on websites Tuesday appears to show the increasing sophistication of the Islamic State group's media arm and begins with scenes of President Barack Obama explaining his decision to order airstrikes.

It then cuts to a bald man in an orange jumpsuit kneeling in the desert, next to a black-clad militant with a knife to his throat. Foley's name appears in both English and Arabic graphics on screen, and he is wearing a clip-on microphone as he begins his statement. The scene is captured on at least two video cameras and has been edited in a professional style.

After the captive speaks, the masked man is shown apparently beginning to cut at the neck of the captive; the video fades to black before the beheading is completed. The next shot appears to show the captive lying dead on the ground, his head on his body. The video appears to have been shot in an arid area; there is no vegetation to be seen and the horizon is in the distance where the sand meets the gray-blue sky. The sound quality is sharp.

At the end of the video, a militant shows a second man, who was identified as another American journalist, Steven Sotloff, and warns that he could be the next captive killed. Sotloff was kidnapped near the Syrian-Turkish border in August 2013 and freelanced for Time, the National Interest and MediaLine.

One US official said the video appeared to be authentic, and two other U.S. officials said the victim was Foley. All three officials spoke on condition of anonymity because they were not authorized to discuss the killing by name.

One of the officials said Obama was expected to make a statement about the killing on Wednesday. Obama was briefed about the video on Air Force One on Tuesday as he flew from Washington to resume his vacation on the resort island of Martha's Vineyard in Massachusetts. A White House statement said he would continue to receive regular updates.

The beheading marks the first time the Islamic State has killed an American citizen since the Syrian conflict broke out in March 2011, upping the stakes in an increasingly chaotic and multilayered war. If confirmed, the killing is likely to complicate U.S. involvement in Iraq and the Obama administration's efforts to contain the group as it expands in both Iraq and Syria.

The group is the heir apparent of the militancy known as al-Qaida in Iraq, which beheaded many of its victims, including American businessman Nicholas Berg in 2004.

The Islamic State militant group is so ruthless in its attacks against all people they consider heretics or infidels that it has been disowned by al-Qaida's leaders. In seeking to impose its harsh interpretation of Islamic law in the lands it is trying to control, the extremists have slain soldiers and civilians alike in horrifying killings - including mounting the decapitated heads of some of its victims on spikes.

Several senior US officials with direct knowledge of the situation said the Islamic State very recently threatened to kill Foley to avenge the crushing airstrikes over the last two weeks against militants advancing on Mount Sinjar, the Mosul dam and the Kurdish capital of Irbil.

Both areas are in northern Iraq, which has become a key front for the Islamic State as its fighters travel to and from Syria.

Since Aug. 8, the US military has struck more than 70 Islamic State targets - including security checkpoints, vehicles and weapons caches. It's not clear how many militants have been killed in the strikes, although it's likely that some were.

Officials from the State Department and Pentagon contacted social media sites Tuesday to inform them of the video and ask them to remove it. White House National Security Council spokeswoman Caitlin Hayden said the Obama administration asked the sites to "take appropriate action consistent with their stated usage policies."

In 2011, Foley was among a small group of journalists held captive for six weeks by the government in Libya and was released after receiving a one-year suspended sentence on charges of illegally entering the country. In a May 2011 interview about his experience, he recounted watching a fellow journalist being killed in a firefight and said he would regret that day for the rest of his life. At the time, Foley said he "would love to go back" to Libya to report on the conflict and spoke of his enduring commitment to the profession of journalism.

"Journalism is journalism," Foley said during the AP interview, which was held in GlobalPost's office in Boston. "If I had a choice to do Nashua (New Hampshire) zoning meetings or give up journalism, I'll do it. I love writing and reporting."

The New York-based Committee to Protect Journalists estimated Tuesday that about 20 journalists are missing in Syria, and has not released their nationalities. In its annual report last November, CPJ concluded that the missing journalists are either being held and threatened with death by extremists, or taken captive by gangs seeking ransom. The group's report described the widespread seizure of journalists as unprecedented and largely unreported by news organizations in the hope that keeping the kidnappings out of public view may help in the captives' release.

Promoted
Listen to the latest songs, only on JioSaavn.com
Earlier on Tuesday, GlobalPost CEO and co-founder Philip Balboni in a statement asked "for your prayers for Jim and his family." AFP chairman Emmanuel Hoog said the French news agency was "horrified" by the video and called Foley "a brave, independent and impartial journalist."