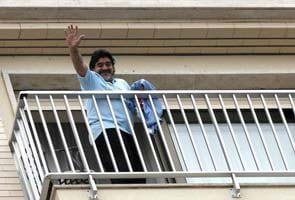 Rome: The same "hand of God" brought the papacy to Argentina as helped it to the 1986 World Cup, says Diego Maradona, the soccer legend whose famously illicit, handled goal against England still excites passions at home and abroad.

In a letter to Rome's Il Messaggero newspaper on Wednesday from his base in Dubai, Maradona, 52, described himself as a devout Roman Catholic and said he rejoiced at the election of his compatriot Cardinal Jorge Bergoglio as Pope Francis.

"I am truly very happy and I am certain that my enthusiasm is shared by the whole Argentinian people," he wrote.

"Everybody in Argentina can remember 'the hand of God' in the England match in the 1986 World Cup. Now, in my country, the 'hand of God' has brought us an Argentinian pope."

In a quarter-final tie in 1986, Maradona eliminated England with two goals, one a brilliant solo run through the defence, the other a handball that the referee mistook for a header.

Promoted
Listen to the latest songs, only on JioSaavn.com
That remark still rankles in England, where the top-selling Sun newspaper's splash on the Argentinian pope showed Francis raising his arm in benediction with the headline: "Hand of God".