Haiti Gang Attack: In that fateful encounter, Vil and two colleagues -- Wilguens Louissaint and Amady John Wesley -- were walking through a dried-up river bed in the foothills overlooking Port-au-Prince while working on a story. 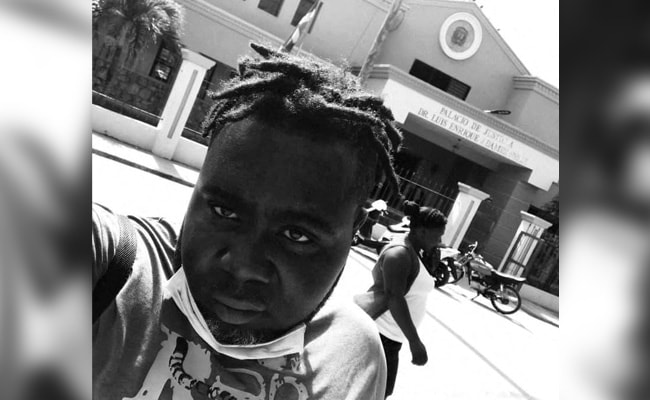 Haiti Gang Attack: John Wesley Amady, one of the two Haitian journalists who was killed.

Vil himself has gone into hiding, fearful that the criminal gang, one of several terrorizing Haiti's capital city, might find him.

In that fateful encounter Thursday, Vil and two colleagues -- Wilguens Louissaint and Amady John Wesley -- were walking through a dried-up river bed in the foothills overlooking Port-au-Prince while working on a story.

As they walked, members of a gang seeking to dominate the area and control a strategic passage to the country's south, suddenly opened fire.

"The bullets were flying, pouring down on us," Vil told AFP in a phone interview Saturday.

The 31-year-old reporter managed to take cover behind nearby trees and, after scrambling up the rocky hillside, was taken in by friendly farmworkers.

The sound of gunfire

In the chaos of the moment, he had lost track of his colleagues.

"I took my phone to call Amady," with whom he had worked for years.

"I asked him where he was and he replied, 'These guys captured me, I'm with them," said Vil, who works for online media outlet RL Production.

Vil then heard his colleague begging gang members to spare him and Louissaint.

He said he put his phone on speaker so the farmworkers sheltering him could listen in.

All they heard was a burst of gunfire.

Vil now knew he was the lone survivor -- and needed to get out fast.

Neighbors gave him clothes so he could disguise himself and led him to a small house to hide.

On the way, he said, "I saw armed guys already on the rooftops who were looking for me."

Knowing the risk they ran by protecting him, the farmworkers found a motorcycle-taxi to take him, along with a local official, out of the gang-controlled zone.

'Better armed than the police'

Though he had escaped the immediate threat, Vil said his previously tranquil life has been shattered.

His four-year-old daughter is afraid and "doesn't sleep," Vil sighed. He and his family have been staying with friends, fearful the gang may have spies in the neighborhood.

Vil knows how the gangs operate, having met them on several occasions while reporting.

"These guys are all-powerful," he said. "I've seen how they work in the ghettos."

"They have so many weapons, and people working for them who you would never have suspected."

He reported his colleagues' deaths to the police but has little hope the killers will be brought to account.

"They know who these guys are... they even have their phone numbers," Vil said.