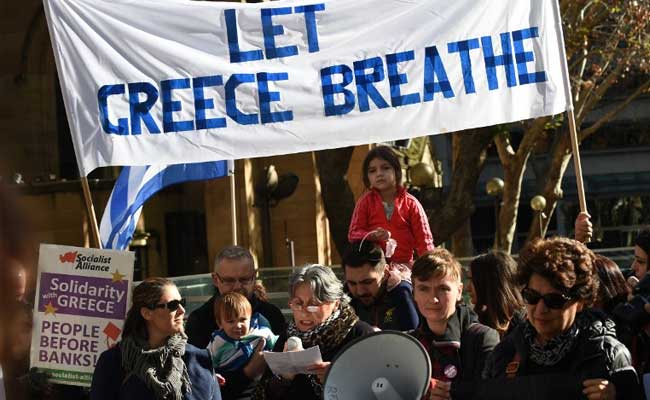 File Photo: Greeks and their supporters gather holding banners in support of their countrymen in Sydney on July 4, 2015, a day before nearly 10 million Greek voters take to the ballot booths to vote 'Yes' or 'No'. (AFP Photo)

Brussels: A new bailout for Greece could amount to between 82 and 86 billion euros, according to a eurozone document drafted Sunday and seen by AFP.

'The Eurogroup takes note of the possible programme financing needs of between EUR 82 and 86bn, as assessed by the institutions,' said the document compiled by eurozone finance ministers.

The draft text was submitted to the 19 eurozone leaders who gathered at a emergency summit later Sunday, hoping to reach a reform-for-bailout deal needed to keep Greece in the single currency bloc.
Comments
GreeceGreek CrisisGreek BailoutEurozoneBailout Greece