Grazing Dangerously: The Romanian Sheep Nibbling Away At US Security

Dumitru Bleja's 250 or so sheep "grazed without problem" in the area for years before the Americans arrived at the end of 2013, says Alexandru Damian, mayor of Stoenesti. Stoenesti, Romania: One of the most important strategic sites in Europe for the US military has come under threat from a rather unexpected enemy: a flock of sheep.

It is their random meanderings near the Deveselu base in southern Romania that has triggered an unusual power struggle between US commanders and a stubborn local sheep farmer.

Dumitru Bleja's 250 or so sheep "grazed without problem" in the area for years before the Americans arrived at the end of 2013, says Alexandru Damian, mayor of Stoenesti, a community on the vast Danubian plain 40 kilometres (25 miles) north of the border with Bulgaria.

"Sheep are not like people. They don't respect the rules, they go into areas where security sensors are active, touching the fence and setting off alarm systems," he says.

But this is unthinkable for the US military, which chose the site as one of its two anti-missile defence systems to help defend NATO members against the threat of short and medium-range ballistic missiles, particularly from the Middle East.

In 2014, the top US official at Deveselu informed Romania's defence ministry that having a shelter for sheep some 10 metres (yards) from the fence "undermines the minimum security requirements and is incompatible" with the running of the base.

The complaint has spiralled into a more than three-year legal saga between the Romanian defence ministry and the farmer that has now reached the country's highest court, which on Wednesday will rule on one of the aspects of the case.

According to the mayor, Bleja had in 2007 bought nearly a hectare (2.5 acres) of land adjacent to the area later taken over by the base, and a year later, he built a shelter for his sheep -- well before work began on the military site.

But, the farmer never applied for planning permission to build, he says.

With the ministry pursuing him for building without a permit, the shepherd has responded with his own claims -- for damages of up to 18,000 euros ($22,000) in the event of the demolition of his 132-square-metre (1,420-square-foot) sheep pen.

For the mayor, the situation is "embarrassing".

"We have signed a treaty with the Americans and we should respect it," he says.

Contacted by AFP, the US military declined to comment "on a dispute between the Romanian government and a private citizen".

"We sincerely appreciate the strong and continued partnership between the United States and our Romanian allies that allows for continued operations at Naval Support Facility Deveselu," said Lieutenant Tim Pietrack, spokesman for the US Navy's Europe, Africa and Southwest Asia region.

The base at Deveselu, which is part of the NATO missile shield and was built at an estimated cost of $800 million, was inaugurated in May 2016, infuriating Russia which views it as a security threat right on its doorstep. 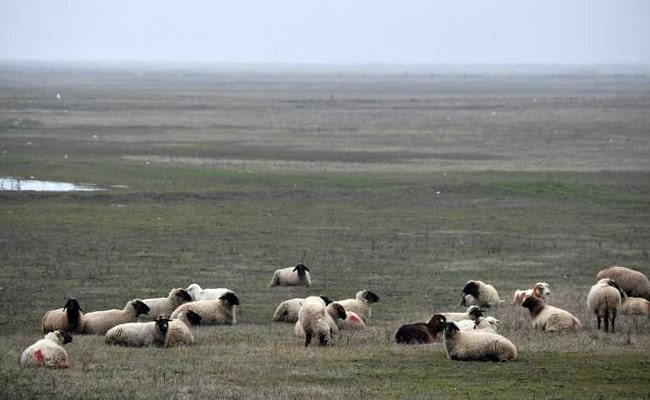 In Stoenesti, residents are largely reluctant to talk "to avoid getting into trouble" with Bleja, but some believe that he is the one at fault.

"Even if we're talking about building a road, people should just accept the conditions laid out" by the authorities responsible for expropriations, said one bar owner.

"You can't just dig in your heels and do things of your own accord. The landowner must reach an agreement with the military and with the local authorities," said a 69-year-old retiree, Nicoleta Nacu.

"And the damages he is asking for are exaggerated because after all, the sheep pen is not all that big."

One local councillor even accused the farmer of buying the land and building the shelter there "on purpose, to be able to demand significant compensation from the Americans."

But the idea is dismissed out of hand by Bleja's lawyer Serban Dinu.

"Out of the question," he says.

"Back in 2007, nobody knew that Deveselu would be chosen" as the site for a US base, he told AFP.

Ahead of Wednesday's verdict, the farmer -- who declined to be interviewed -- has gone with his sheep to his hometown of Caracal, which lies 15 km west of Stoenesti.

(This story has not been edited by NDTV staff and is auto-generated from a syndicated feed.)
Comments
Romanian SheepUS militaryStoenesti