As of now, Marvel Studios nor Disney has commented on the matter. 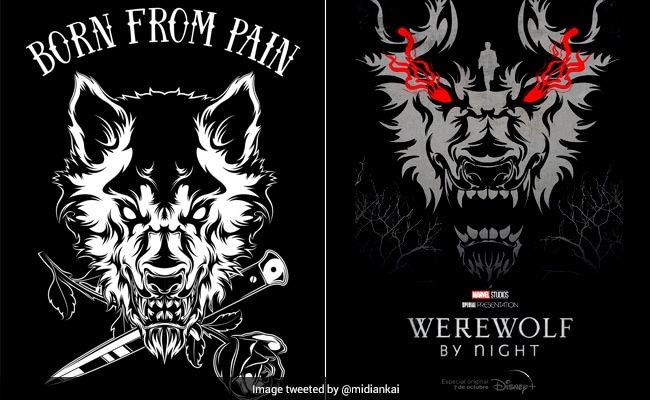 The artist confirmed that he has taken "some legal steps towards this case".

With the recent release of "Werewolf By Night" on Disney+ and Disney+ Hotstar, a graphic artist, who goes by the name of Midi on Twitter, accused Marvel Studios of plagiarising his artwork. Taking to Twitter on Friday, Midi (@midiankai) claimed that Disney and Marvel Studios' official "Werewolf By Night" poster copied designs from a cover he created years ago for "Born From Pain", a Dutch hardcore band.

"I might be crazy but did marvel just rip me off? I did this art for born from pain around 6 years ago," the graphic artist wrote on social media while sharing a side-by-side comparison of Marvel's "Werewolf by Night" poster and his own work created for the Dutch punk band "Born From Pain".

I might be crazy but did marvel just rip me off? I did this art for born from pain around 6 years ago pic.twitter.com/2BudSZcXRW

There are some differences between Midi's design (left) and the "Wereworlf By Night" poster (right), such as the red eyes and level of fine detail. However, other features, including the shape of teeth, nose and the tufts of hair around the face look very similar.

In the following tweet, Midi shared a close-up image of the Marvel poster and said, "As a vector artist I can tell that these rounded ends mean the art was auto-traced and then edited". He also confirmed that he has already taken "some legal steps towards this case".

"My wife saw this thumbnail on @AngryJoeShow video and said is that yours? I said "haha yeah" and kinda didnt think about it, until i stumbled on it again and recognized my own lines, and i even see how it was re-edited, weird shit," Midi added.

As of now, Marvel Studios nor Disney has commented on the matter. However, this is not the first time that Disney or Marvel has been accused of plagiarism on poster art.

Back in 2021, "Hawkeye" artist David Aja called Marvel Studios out for its track record of either not crediting or not properly compensating artists and creatives. A poster used for the Disney+ "Hawkeye" series was almost identical to a design used in the Hawkeye comic series by Matt Fraction, David Aja, and Matt Hollingsworth.

Separately, according to The Hollywood Reporter, in 2018, Disney was also accused of plagiarism for the "Star Wars" movie "Solo". However, it cited the use of an outside vendor and said that they were "looking into it".