Virginia Woolf Celebrated With Google's Doodle On Her 136th Birthday

Virginia Woolf pioneered the non-linear approach to narrative, a unique literary style which established her as one of the leading voices modern feminism. 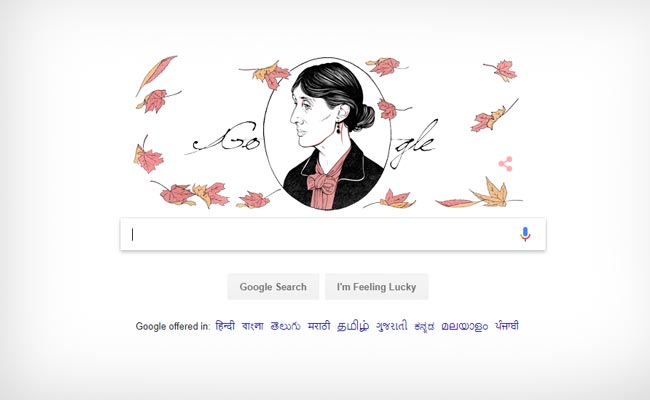 New Delhi: English novelist Virginia Woolf's 136th birthday was celebrated by Google with a doodle featuring her iconic profile surrounded by autumn leaves. Widely regarded as one of the most distinguished literary figures of the 20th century, her works include modernist classics such as 'Mrs. Dalloway' (1925) and 'To the Lighthouse' (1927) as well as feminist texts like 'A Room of One's Own' and 'Three Guineas.' Virginia Woolf pioneered the non-linear approach to narrative, a unique literary style which established her as one of the leading voices modern feminism. She was one of the major icons of the feminist movement in the 1970s. Almost 77 years after her tragic death, her work still exerts significant influence on the literary world today.

Born in a prosperous household in Kensington, London, Adeline Virginia Stephen was raised by free-thinking parents. Her father, Sir Leslie Stephen was a historian and an eminent critic and her mother, Julia Jackson -- born in British India -- was a celebrated beauty of her time.

Both of Virginia Woolf's parents had prominent social and artistic connections. Her father's first wife was the daughter of novelist William Makepeace Thackeray, whereas her mother's aunt was Julia Margaret Cameron, one of the greatest portrait photographers of the 19th century. While Virginia Woolf had a privileged childhood, she also suffered with severe bouts of deep depression throughout her life. She and her sisters were educated at home, and at the age of nine she started writing a family newspaper, Hyde Park Gate News in which she stated weekly family affairs.

Her ideal life came to an end with the death of her mother in 1895 which led her to have a nervous breakdown. Two years later, her half-sister Stella died. It was the death of her father in 1904 that plunged her into depression. Virginia even tried to commit suicide and was briefly institutionalised.

Promoted
Listen to the latest songs, only on JioSaavn.com
She eventually recovered and soon after her recovery, started writing professionally. She contributed weekly articles for the Times Literary Supplement. Married to Leonard Woolf in 1912, Virginia Woolf published her first novel, 'The Voyage Out' in 1915. She rose to prominence in the London Literary society between the First and Second World War. During this period, most of her famous works were published.

He last novel 'Between The Acts' was published soon after her tragic death in 1941. On March 28, 1941, suffering from yet another episode of depression, she drowned herself in the River Ouse in Sussex. She left a suicide note for her husband, and her body was found three weeks later. Virginia Woolf undoubtedly left a significant mark on the literary world.