Kano Jigoro, Google Doodle: Born in 1860 in Mikage (now part of Kobe), Kano Jigoro moved to Tokyo with his father at age 11. 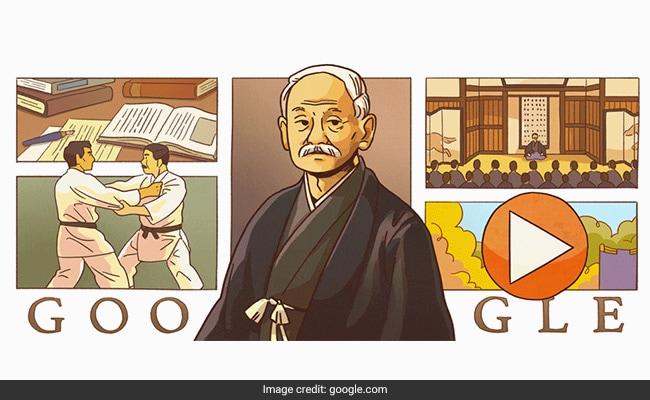 Google Celebrates Kano Jigoro who saw martial art as a way to bring people together.

Google today celebrated Japan's "Father of Judo", Professor Kano Jigoro, on his 161st birthday, with a doodle. Kano saw the martial art as a way to bring people together, even while throwing opponents to the mat.

Born in 1860 in Mikage (now part of Kobe), Kano moved to Tokyo with his father at age 11. To build strength, he became determined to study the martial art of Jujutsu.

Judo was first born during a Jujutsu sparring match when Kano incorporated a western wrestling move to bring his much larger opponent to the mat. By removing the most dangerous techniques used in Jujutsu, he created "Judo," a safe and cooperative sport based on Kano's personal philosophy of Seiryoku-Zenyo (maximum efficient use of energy) and Jita-Kyoei (mutual prosperity of self and others).

The name Judo means "the gentle way" and the sport is built on principles such as justice, courtesy, safety, and modesty.

In 1882, Kano opened his own dojo (a martial arts gym), the Kodokan Judo Institute in Tokyo, where he would go on to develop Judo for years. He also welcomed women into the sport in 1893. He became the first Asian member of the International Olympic Committee (IOC) in 1909, and in 1960, the IOC approved Judo as an official Olympic sport.