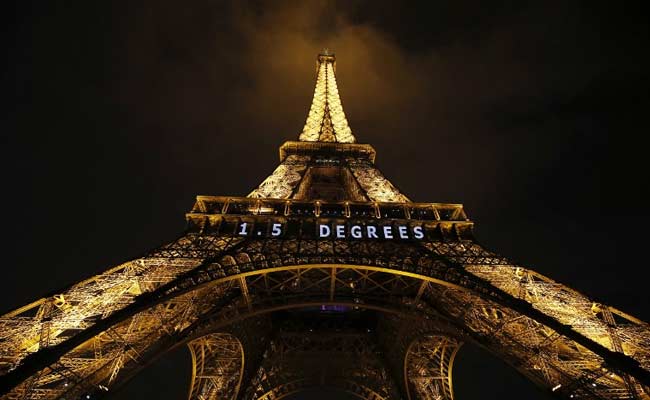 "1.5 Degrees" in white neon is lit on the Eiffel Tower in the French capital, as the COP21 United Nations Climate Change Conference takes place at Le Bourget, on the outskirts of Paris, on December 11, 2015. (AFP)

Paris: French Foreign Minister Laurent Fabius said on Friday that an ambitious global climate deal was within reach, though political concessions were still required to get over some last hurdles.

Fabius said he remained on track to present a final agreement on Saturday morning, a day later than planned, that could be adopted by consensus among the almost 200 countries negotiating in the French capital.

The last stumbling blocks were over money, specifically how to structure hundreds of billions of dollars in funding from rich nations to poor ones to help them adapt to climate change.

"Evidently, not everyone will obtain 100 per cent of what they are asking," Fabius told journalists as he emerged from discussions late on Friday.

"When there are 196 parties on such a complex subject, if everyone demands 100 percent, each and everyone will obtain zero per cent," he said. "We must have a spirit of compromise."

Despite late-in-the-game delays and a frustrating night of talks late on Thursday, many participants said the momentum towards an agreement was unlikely to be crushed at this stage.

"There are some very strongly held views but I also think there is a spirit of compromise," Australian Foreign Minister Julie Bishop said as talks moved into Friday night, past the hour where Fabius had pledged to have the deal wrapped up.

The negotiators are trying to seal an agreement that would bind both rich and poor nations to cut rising greenhouse gas emissions.

UN Secretary-General Ban Ki-moon called a 27-page draft text on the table "a good basis" for a deal to help avert more powerful storms, droughts, desertification and rising sea levels. "I appeal to all parties to take a final decision for humanity," he said.

One of the last sticking points is over how to accommodate US financial commitments. To help developing countries navigate the shift to a low-carbon economy, rich nations have promised to provide $100 billion in yearly funding by 2020.

Secretary of State John Kerry, the top American negotiator in Paris, says the United States remains committed to raising and mobilizing the billions for that pledge.

But the Obama administration cannot put financial pledges into a legally binding accord because such spending requires Congressional approval -- a near impossibility given Republican hostility to any global agreement on climate change.

The US refusal to do so has angered some developing countries who want to see the money enshrined in a deal.

Others said a compromise arrangement was still the most likely outcome.

"We know the constraints of the United States," said Xolisa Ngwadla, lead negotiator for the African Group. "They cannot take home an agreement that seems to be placing additional obligations on them under this agreement because that will require Senate approval."

In fact, it appeared increasingly unlikely that countries would be willing to risk scuttling a consensus at this stage in the talks.

Saudi Arabia said it would resist language in the draft calling for a rise in global temperatures to be limited to "well below" 2 degrees Celsius (3.6 Fahrenheit) above pre-industrial levels. It fears that target could jeopardise oil production.

But UN officials said privately they did not foresee the Saudis pushing so far as to block an agreement. Nor did they expect objections from other nations, such as Venezuela, that have been obstacles in the past.

Gao Feng, the Chinese Foreign Ministry's special representative on climate change, played down differences between China and the United States, saying: "There are no special differences. A deal is getting closer."

The draft text, released on Thursday, also proposes a target of "greenhouse gas emissions neutrality in the second half of the century".

Past conferences have run aground on accusations that major powers were cutting their own deals and shutting down the views of smaller countries. This time, it is the big powers which have expressed impatience at the willingness of Fabius to ensure all views are heard.

"The French are allowing everyone to have their say," said one senior European official.

Still, the big powers exercised their own back channels.

China's President Xi Jinping spoke with US President Barack Obama by telephone on Friday and said their countries, the top emitters of greenhouse gases, should step up efforts to reach a climate change deal, Chinese state media reported.

Xi said the two nations "must strengthen coordination with all parties and work together to ensure the Paris climate summit reaches an accord as scheduled", according to state television.
© Thomson Reuters 2015