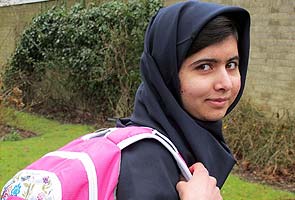 Mingora: When the Pakistani Taliban shot Malala Yousafzai in the head, their message to the world was simple: girls have no right to an education and their dreams of a better future should be crushed.

The attack portrayed the world's only Muslim nuclear power in an appalling light as Western leaders and celebrities fell over themselves to turn Malala into a global icon of child rights.

But while she gears up to address the UN General Assembly on Friday -- her 16th birthday and nine months since the shooting -- more girls than ever in her home, Pakistan's northwestern Swat valley, are in school.

Educationalists say it has less to do with Malala's fame and more to do with a growing confidence that far from being resurgent, Taliban influence is declining in Swat.

"Many students were actually scared when the government named a college after Malala," said Anwar Sultana, head mistress of Government Girls High School No 1, the oldest in Mingora, the main town in Swat.

Last December, around 150 girls at another school protested against the renaming of their college after the injured schoolgirl, fearing it would make them a target for militants.

They tore up and stoned pictures of Malala, since nominated for the Nobel Peace prize and now being privately educated in Britain, accusing her of abandoning Pakistan.

But Sultana says more girls are now going to school because people feel more liberated as more time passes since the Pakistan army quashed a 2007-9 Taliban insurgency in the valley.

"Whenever you suppress something, it appears with more freedom," she told AFP, sitting on a veranda as girls in long white shirts and baggy trousers poured out of congested classrooms.

"The Taliban banned girls education and threatened females for going to schools. Now more and more girls are joining schools which means the fear is over," Sultana said.

In the first six months of 2013, 102,374 girls registered at primary schools in Swat compared to a total of 96,540 during all of last year, said Dilshad Bibi, Swat district education officer.

At Sultana's school, there are no desks and chairs in the dark brown, grey and orange coloured classrooms. Instead the girls sit on the floor to pack a maximum number into each room.

Saeeda Rahim, 13, is one of those girls.

The Taliban stopped her and thousands of other girls from going to school between 2007 and 2009. When the army offensive came in 2009, she and her family were forced to flee for their safety.

Displaced for three months, she spent much of the time in tears, her dreams of getting an education and becoming a doctor in tatters.

"Those days were the most difficult of my life. I lost hope and courage. I had no energy to read. I thought I'd never be able to study again," she told AFP.

Then when her family returned home, her mother initially refused to let her go back to school, fearing that she could be attacked.

But she is now back at Government High School No 1. She covers her face with a white veil, wears the pink strip of a prefect and says she takes inspiration from Malala.

"I really like her speeches. I want to continue her work, I want to appear in the media and convince parents that education is a right for their daughters," she said.

There is certainly a long way to go.

Throughout Pakistan, nearly half of all children and nearly three quarters of young girls are not enrolled in primary school, according to UN and government statistics published late last year.

In Malala's northwestern Khyber Pakhtunkhwa province only 36 per cent of women and 72 per cent of men are literate, according to the government.

Muhammad Atif, the provincial education minister, says hardline Islamist militants have destroyed 750 schools since 2008, of which 611 have been reconstructed.

The new provincial government, led by the party of former cricketer Imran Khan, has increased its annual education budget by 27 per cent and declared female education its priority.

"Our government has allocated 66 billion rupees ($660 million), the highest amount in the provincial budget for education and female education is our top priority," said Atif.

Azra Niaz, a teacher at Government Girls High School No 1, says Malala's defiance and determination to continue her education - despite being so badly wounded - was a true inspiration.

Promoted
Listen to the latest songs, only on JioSaavn.com
"Every girl has been encouraged. Their fear has stopped. Every girl now wants to become a Malala. They say 'we want to study and progress in life'," she told AFP.