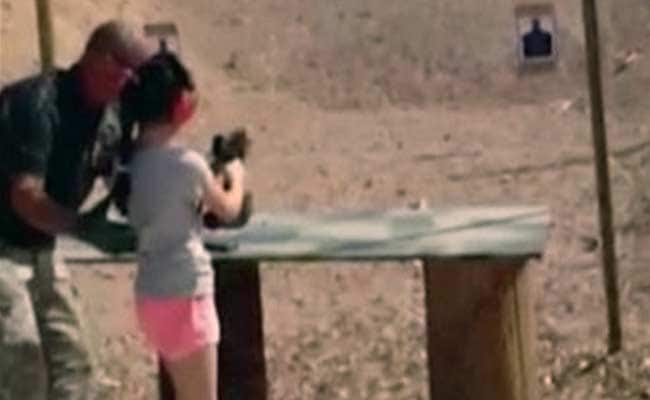 A video of the shooting was recorded by her parents on their cellphone. (Associated Press)

Phoenix: A 9-year-old girl who fatally shot a gun range instructor with an Uzi submachine gun last week told her mother immediately afterward that the weapon was too much for her to handle and had hurt her shoulder, said a sheriff's report released on Tuesday.

The girl's family also did not realize right away that the instructor, 39-year-old Charles Vacca, had been struck by a round from the gun, the Mohave County Sheriff's Office report said.

Vacca had been showing the girl how to fire an Uzi at the Arizona Last Stop gun range in remote White Hills last week when the recoil caused her to lose control of the high-powered weapon, the sheriff's office has said.

Vacca was struck by at least one bullet and later died, in an accident that touched off debate over the wisdom of giving children access to high-powered firearms, even in a controlled setting such as a gun range.

The sheriff's office has said no criminal charges were pending after what it described as an "industrial accident." State occupational health and safety officials have opened their own investigation.

The girl's mother, who was visibly upset, told officers that immediately following the shooting, her daughter "turned to her (and) told her the gun was too much for her and hurt her shoulder," the report said.

"(The mother) said no one knew Vacca was shot until the other instructor ran over," an officer wrote.

Another officer, citing another instructor at the range, said that when the girl fired the weapon, it went "straight up in the air." Vacca fell to his left toward a table, blood pouring from the wound.

When officers arrived, they found Vacca on the ground still breathing and moaning as another man applied a towel to his head. Blood covered a folding table next to him.

A video clip of the moments leading up to the shooting, released by the sheriff's office and circulating on the Internet, shows Vacca giving a girl in pink shorts hands-on instruction as she aims the Uzi at a target.

He is heard encouraging the girl and asking her to squeeze off one shot before telling her: "All right, full auto." The weapon then unleashes multiple rounds as the video cuts off. It was apparently moments later that Vacca was shot.

The Last Stop is a tourist hub that includes a restaurant, bar, RV park and general store and is decorated with paintings of firearms, faux bullet holes and crosshairs and a mural depicting a gun-toting Sylvester Stallone in the film "Rambo."

The range has a "Burgers and Bullets" program offering customers lunch with a trip to the range, where they can choose from more than 20 automatic weapons to shoot, according to the Last Stop website. It lists the minimum age as 8.

The family had been visiting Last Stop from Las Vegas and had taken a ride on a "monster truck" before trying the shooting range, the report said.