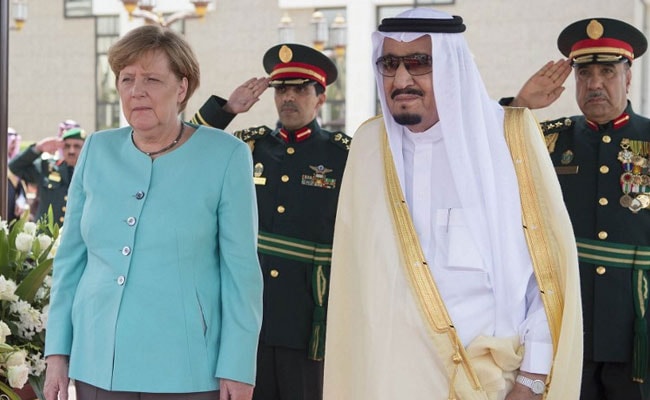 Chancellor Angela Merkel had called for a ban on the burqa in Germany.

Riyadh: German Chancellor Angela Merkel, who is on a visit to Saudi Arbia, arrived in the oil-rich kingdom without a headscarf for talks with King Salman. Ms Merkel was greeted by King Salman and other officials upon her arrival at the western city of Jeddah on Sunday, The Independent reported.

The 62-year-old, like other female Western visitors, did not cover her hair upon arrival in the conservative kingdom. British Prime Minister Theresa May also avoided the strict dress code for women when she visited the country. Ms May had said that she hoped to be an inspiration to oppressed women in Saudi Arabia.

Saudi Arabia enforces a conservative dress code in public, requiring women to wear a full-length robe and cover their hair, in keeping with other restrictive laws including a guardian system limiting women's movement and a ban on driving.

Foreign visitors have not always followed the protocol, and Ms Merkel also followed the footsteps of Ms May, President Donald Trump's Democrat rival Hillary Clinton and former First Lady of the US Michelle Obama.

Ms Merkel had called for the burqa to be banned in Germany, saying it was "not acceptable in our county".

"It should be banned, wherever it is legally possible," she had said.

The German parliament last week voted for a draft law banning women working in the civil service, judiciary and military from wearing full-face veils. Burqas will be prohibited in select professions as part of the legislation, once approved by the Bundesrat state parliament.

The German leader is expected to press Gulf leaders to do more to take in refugees and provide humanitarian relief for those fleeing conflict in Muslim-majority countries. According to The Independent, Germany has provided refuge to hundreds of thousands of people from Syria, Iraq and Afghanistan in recent years.

The German Chancellor is scheduled to travel to the neighbouring United Arab Emirates after visiting the Saudi Kingdom.
Comments
Saudi ArabiaAngela MerkelburqaHijabKing Salman