Some 2,000 police troops lined up around a square outside the City Hall, where revellers gyrated and waved flags as scantily-clothed performers sang and danced on the stage. 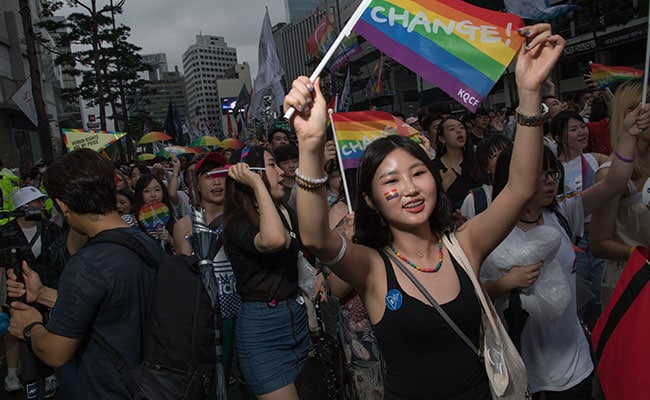 The crowd estimated to be some 10,000 people later paraded through the centre of Seoul (AFP)

Seoul, South Korea: Thousands of people celebrated gay rights with song, dance and a march in Seoul Saturday, amid rain and boisterous protests by conservative Christians.

Religious South Koreans have been a loud fixture at the annual parade for years, holding a rival anti-homosexuality rally while trying to physically block the march.

Some 2,000 police troops lined up around a square outside the City Hall, where revellers gyrated and waved flags as scantily-clothed performers sang and danced on the stage.

Across the street hundreds of Christians chanted slogans, calling homosexuality a "sin" and urging homosexuals to "return to Jesus Christ".

Their presence is the most visible display of intolerance towards sexual minorities in the tradition-bound society, where religious belief is widespread and many homosexuals stay in the closet due to fear of discrimination and social isolation.

Homosexuality is not illegal in South Korea. But gay, lesbian or transgender rights remain politically unpopular

But festival-goers took the protest in their stride.

The crowd, estimated to be some 10,000, later paraded through the centre of Seoul, carrying banners and rainbow flags, with many swaying on open truck beds.

Meghan Lefevre from California, said: "I am happy that they (police) are here to make us feel protected. Not every country will do that. So I am very happy that it's a safe environment."

Gay rights activists say that some progress has been made in recent years, with surveys showing increasing tolerance, particularly among young people, and participation at Pride surging since the first parade in 2000, when only 50 attended.

The National Human Rights Commission of Korea, a state rights watchdog, and the Jogye Order of Korean Buddhism -- the country's biggest Buddhist sect -- are taking part this year for the first time.

"Buddha has taught us everyone, regardless of his or her sexual orientation, can attain perfect enlightenment. Sexual minorities must not be indiscriminated against", said Hyo Rok, a senior nun and professor at the Seoul University of Buddhism.

But the event's growing profile has unnerved South Korea's conservative Protestant church groups, which have millions of followers, enormous political lobbying power, and see homosexuality as a psychological illness to be "healed".

(This story has not been edited by NDTV staff and is auto-generated from a syndicated feed.)
Comments
gay rights in Seoulgay parade and protestsgay rights activists