The latest draft, seen by Reuters, includes language supporting implementation of the 2015 Paris Agreement, and saying the accord signed by 200 nations is "irreversible". 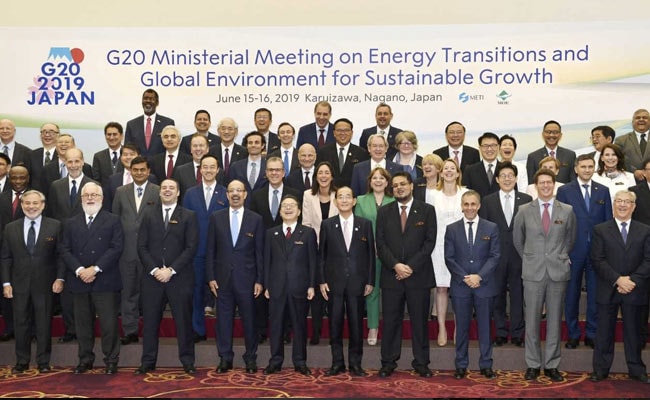 Ministers and delegates, including Japan's Minister of Economy, gather for a photo session at G20.

G20 negotiators are wrangling over the wording of a summit communique on combatting climate change, with the United States pushing to downgrade the language against European opposition, according to sources and drafts of the text.

The arguments are a reprise of tussles over global warming that have stymied talks in multilateral forums since U.S. President Donald Trump pulled the United States out of a landmark agreement to limit the effects of climate change.

The latest draft, seen by Reuters, includes language supporting implementation of the 2015 Paris Agreement, and saying the accord signed by 200 nations is "irreversible".

An earlier draft, also seen by Reuters, did not include such language at the insistence of the United States, two sources familiar with the discussions over the communique told Reuters.

Further changes to the communique are likely before the final adoption of the text on Saturday by Group of 20 leaders in Osaka for this week's summit, but the inclusion of stronger language came as French President Emmanuel Macron said France will not accept a text that does not mention the Paris agreement.

"If we don't talk about the Paris Agreement and if we don't get an agreement on it amongst the 20 members in the room, we are no longer capable of defending our climate change goals and France will not be part of this," he said in Tokyo on Wednesday before heading to Osaka.

France was one of the main drivers behind the Paris accord and the French parliament is now debating an energy bill that targets net zero greenhouse gas emissions by 2050.

"Negotiations on the topic of climate will be especially difficult this time," a German government official said on Wednesday.

Nations in Paris agreed to limit the global average rise from pre-industrial temperatures to well below 2 degrees Celsius (3.6 degrees Fahrenheit). Current policies, though, put the world on track for at least a 3C rise by the end of the century, according to a United Nations report in 2016.

Summit host Japan has been criticized for backing the continued use of coal for power generation, one of the biggest sources of gas emissions that cause global warming.

G20 leaders will meet on Friday and Saturday.