The 18-year-old killer had exchanged messages on WhatsApp with the father of a girl in Paty's class, the sources told AFP. 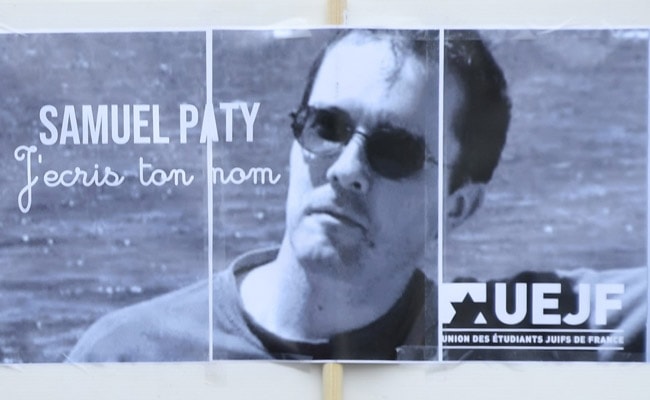 French teacher Samuel Paty was beheaded by an attacker who was shot dead by policemen.

A man who beheaded a history teacher outside Paris last week had been in contact with a parent who was leading an online campaign against the teacher, police sources said on Tuesday.

The 18-year-old killer had exchanged messages on WhatsApp with the man, who wanted Samuel Paty fired after his daughter told him how the teacher had shown cartoons of the Prophet Mohammed in a lesson on free speech.

The father is one of 16 people being held over the killing that has sent shock waves through France five years after jihadists massacred 12 people at the satirical magazine that published the cartoons.

Abdullakh Anzorov, who is of Chechen origin, launched the attack as Paty was returning home on Friday from the junior high school where he taught in Conflans-Sainte-Honorine, 40 kilometres (25 miles) northwest of Paris.

The police sources did not say how Anzorov had come into contact with the father, who had led a fierce campaign against Paty for showing the cartoons seen by many Muslims as offensive.

But the father had put his telephone number in a Facebook post with a video calling for protests against Paty.

The father, whose daughter was a pupil of Paty's but was not in class at the time of the lesson according to police sources, accused the teacher of "pornography" for showing a cartoon of Mohammed naked.

The school said Paty had given Muslim pupils the choice to leave the classroom before he showed the images.

The father later published a second video attacking the teacher, in which he appeared alongside a known Islamist radical, who is also now in police custody.

Five schoolchildren are also being held on suspicion of helping Anzorov identify his victim in return for money.

Anzorov was shot and killed by police shortly after the attack.