Three days from Christmas, fewer French "yellow vests" turned out for a sixth Saturday of protests, targeting border points as a fatal road accident brought the death toll to 10 since the movement began last month.

A total of 38,600 people took part in protests across the country, well down from the 66,000 by the same time the previous Saturday, the interior ministry said. There were 220 people detained nationwide, 81 of whom were taken into police custody, it added.

The number of demonstrators has been trending downwards since 282,000 people turned out for the first Saturday protest against planned fuel tax hikes on November 17.

The movement, characterised by the high-visibility yellow vests worn by the protesters, then morphed into a widespread demonstration against Macron's policies and style of governing.

Health minister Agnes Buzyn told Le Journal du Dimanche (The Sunday Newspaper) Macron's government was "in step with the demands of the yellow vests" as she called for "a more constructive dialogue". 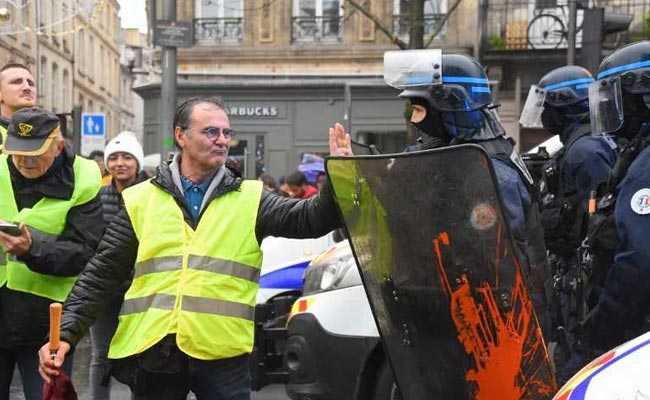 Prime minister Edouard Philippe told the same newspaper his relationship with Macron has only "intensified" during the crisis, rather than become strained, as has been reported.

"We talk a lot. We tell each other things," he said.

Yesterday's numbers were a sharp drop from last week, when Macron, a pro-business centrist, gave in to some of the movement's demands.

In Paris, the scene of fierce clashes during previous demonstrations, around 2,000 protesters joined rallies scattered around the city compared with 4,000 last week, police said.

As evening fell, violence broke out on the iconic Champs-Elysees avenue, where many shops had remained open for business in the busy weekend before Christmas.

Paris police said 142 people were detained and 19 taken into police custody in the French capital, including a "yellow vest" leader, Eric Drouet. 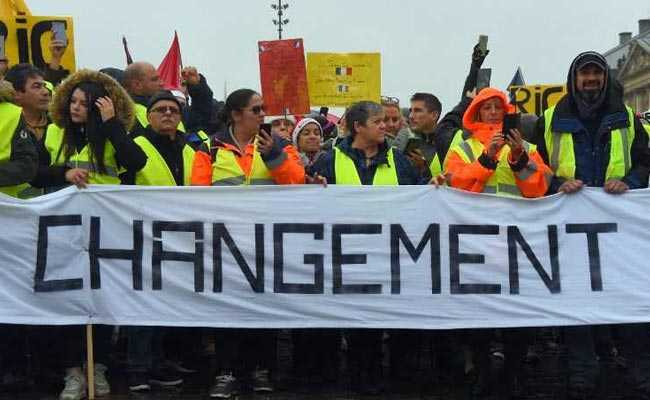 He denounced the decapitation of an effigy of Macron, violent attacks on police after an officer's motorcycle was taken by protesters on the Champs-Elysee, and that outside the Sacre Coeur church some had sung a song by comedian and political activist Dieudonne, who has been convicted for anti-Semitic insults.

Interior Minister Christophe Castaner meanwhile said there had been a "real slowdown", but some people "continue to come and protest, driven by hatred of institutions".

Near the border between France and Spain hundreds of protesters disrupted traffic as they gathered around an autoroute toll booth.

Police fired tear gas to disperse the "yellow vests" who retreated to a bridge, an AFP photographer at the scene said.

France borders the Catalan region of Spain, and the protesters were joined by dozens of Catalan pro-independence activists, also wearing yellow vests.

The separatists often block highways to protest against Madrid's rejection of Catalonia's independence referendum in October 2017.

Even though their goals are different, "this demonstration at the Boulou (toll booth) is symbolic, it shows the solidarity between the Spanish Catalans and the French," said Marcel, a 49-year-old winegrower. 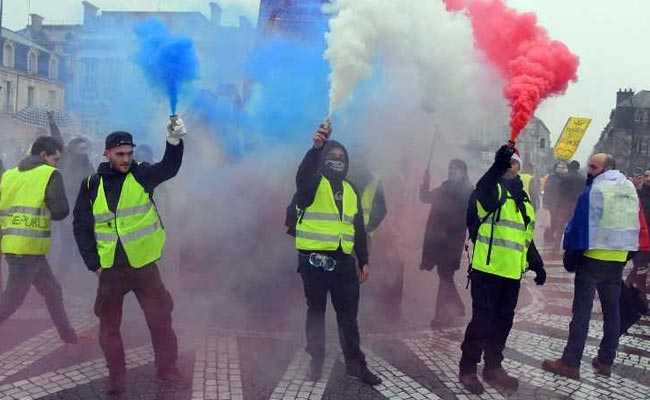 Two journalists covering the Boulou rally for France 2 television said they were "violently" attacked by the protesters.

Editor Anne Domy told AFP that she and her colleague Audrey Guiraud were "targeted, chased and beaten by a crowd of protesters that completely surrounded us".

One "yellow vest" protester helped the two journalists escape in a "hail of insults", she said.

The media and journalists have been frequent targets of the "yellow vest" movement's ire.

Roadblocks were also reported near the border with Italy and at a bridge in Strasbourg near the German border.

While the demonstrations were mainly calm compared to the Paris riots earlier in the month, there were concerns about their effect on pre-Christmas sales.

A driver died overnight when his car slammed into the back of a truck stopped at a roadblock set up by "yellow vest" protesters at an autoroute entrance in Perpignan on the Mediterranean coast, prosecutor Jean-Jacques Fagni told AFP.

There have now been 10 deaths since the protests began on November 17.

A Facebook event organised by Drouet had listed thousands of people "interested" in joining a demonstration at the Palace of Versailles outside Paris but only around 60 showed up.

On Friday, the French Senate approved measures to help the working poor and pensioners just hours after they were adopted by the lower house of parliament  which aim to quell "yellow vest" anger and should come into force early in 2019.