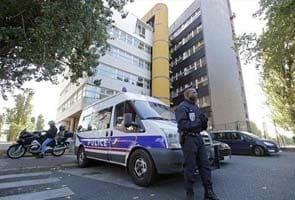 Paris: France stepped up security and appealed for calm Wednesday after a weekly published naked cartoons of the Prophet Mohammed that risked fanning outrage in the Islamic world.

Security was reinforced at French missions in countries where there could be a hostile reaction.

Embassies, consulates, cultural centres and international French schools in around 20 countries will be closed on Friday for fear of being targeted in demonstrations following weekly prayers.

Foreign Minister Laurent Fabius admitted he feared a backlash in the Muslim world, where tempers are already running high over an anti-Islam film made in California and posted on the Internet.

Police were deployed outside the Paris offices of Charlie Hebdo, the satirical magazine which published the cartoons.

The left-wing, libertarian publication's offices were firebombed last year after it published an edition "guest-edited" by the Prophet Mohammed that it called Sharia Hebdo.

Prime Minister Jean-Marc Ayrault urged "responsibility" and said anyone offended by the caricatures could sue.

Leaders of the large Muslim community in France said an appeal for calm would be read out in mosques across the country on Friday but also condemned the magazine for publishing "insulting" images.

The weekly carries a total of four cartoons which include images definitely intended to represent Mohammed, as opposed to any other Muslim.

In two of them, the Prophet is shown naked.

One is inspired by Jean-Luc Godard's 1963 film "Contempt" and features the naked Prophet asking the director "You like my buttocks?" -- parroting a line delivered by Brigitte Bardot in the film.

Another shows the founder of Islam crouched on all fours with a star coming out of his behind with the inscription "A Star Is Born."

The film references were an attempt to satirise the crudely-made short film "Innocence of Muslims" which has triggered the worldwide protests.

But the explict, arguably vulgar, nature of the drawings made it inevitable they would cause offence.

Another cartoon depicts a cover of Closer, the magazine which created a furore by publishing topless photographs of Prince William's wife Catherine, promising exclusive snaps of "Mrs Mohammed".

The figure shows a man's gap-toothed, bearded head on top of a woman's body with bared breasts.

Charlie Hebdo's website crashed on Wednesday after being bombarded with comments that ranged from hate mail to supportive comments.

Ayrault said anyone offended by cartoons could take the matter to the courts but made it clear there would be no action against the weekly.

"We are in a country where freedom of expression is guaranteed, including the freedom to caricature," he said.

"If people really feel offended in their beliefs and think there has been an infringement of the law -- and we are in a state where laws must be totally respected -- they can go to court," Ayrault said.

He also said a request to hold a demonstration in Paris would be refused. France's interior ministry has already banned all protests over the controversial film following a violent demonstration last weekend near the US embassy.

"I'm not asking strict Muslims to read Charlie Hebdo, just like I wouldn't go to a mosque to listen to speeches that go against everything I believe."
Comments
French embassy