The meeting was set to go ahead without any UK presence, prompting London to demand France reconsider the snub. 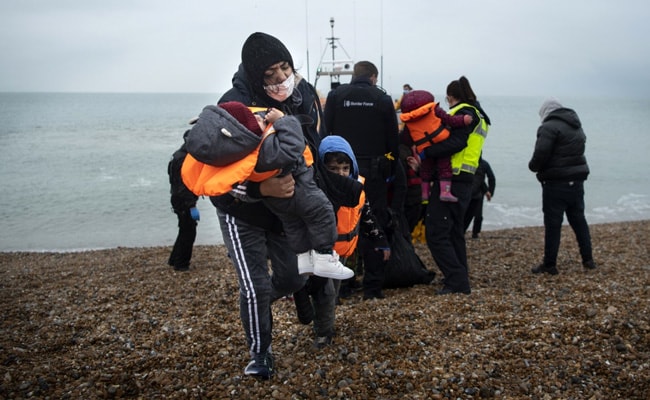 The row puts UK and France at odds as they aim to tackle the worst migrant tragedy in the Channel.

France on Friday scrapped planned talks with the UK about migrant crossings in anger at a letter by Britain's prime minister over the crisis, pushing relations to new lows following the deaths of 27 people in the Channel this week.

Interior Minister Gerald Darmanin told UK counterpart Priti Patel she was no longer invited to talks at the weekend about the migrant crisis in the Channel with other European ministers.

The meeting was set to go ahead without any UK presence, prompting London to demand France reconsider the snub.

The row puts London and Paris at odds when they are searching for a coordinated response to the worst migrant tragedy in the Channel.

It has added to a litany of post-Brexit problems between Britain and France, with French fishermen on Friday due to stage a blockade of Channel ferry ports and stop freight entering the Channel Tunnel in protest over fishing licences.

In a message seen by AFP, Darmanin told Patel the letter from Johnson to President Emmanuel Macron suggesting France take back migrants who cross the Channel was a "disappointment."

Referring to Johnson's posting of the letter on social media, he added: "Making it public made it even worse. I therefore need to cancel our meeting in Calais on Sunday."

A source close to Darmanin told AFP that Sunday's meeting would be going ahead with the ministers from other European countries but added Patel was no longer invited after Johnson's letter.

"We consider the British Prime Minister's public letter to be unacceptable and contrary to the discussions we had with our counterparts," said the source, who asked not to be named.

"Therefore, Priti Patel is no longer invited to the interministerial meeting on Sunday, which is maintained in the format of France, Belgium, the Netherlands, Germany and the European Commission."

"It's in our interests. It's in their interests," he told the BBC.

Speaking to BFM-TV, government spokesman Gabriel Attal slammed the letter as "poor" and added France was "tired of (Britain) speaking out of both sides of the mouth" in discussions on the issue.

Johnson wrote to Macron on Thursday asking France to immediately start taking back all migrants who land in England after crossing the Channel.

Taking back migrants "would significantly reduce -- if not stop -- the crossings, saving thousands of lives by fundamentally breaking the business model of the criminal gangs" behind the trafficking, he said.

Seventeen men, seven women and three minors died on Wednesday when their inflatable boat lost air and took on water off the northern port of Calais on Wednesday. A manslaughter probe has been opened.

Five suspected traffickers accused of being directly linked to the doomed crossing have been arrested.

Darmanin said only two survivors, an Iraqi and Somali, had been found and they were recovering from extreme hypothermia and would eventually be questioned.

Northern France will also be hit by protests later Friday on the separate issue of fighing rights.

But Paris says dozens of French boats have had their applications to fish the UK's rich waters rejected, an assessment strongly contested by London.

Dozens of French fishing boats will block ferries from Britain at three ports of the French Channel -- Saint-Malo, Ouistreham and Calais -- from midday (1100 GMT).

In the afternoon, the fishermen will attempt to block the access of goods trucks to the freight terminal of the Channel Tunnel from 2:00 to 4:00 pm (1300 GMT to 1500 GMT).

"We don't want handouts, we just want our licenses back. The UK must abide by the post-Brexit deal. Too many fishermen are still in the dark," said French national fisheries committee (CNPMEM) chairman Gerard Romiti, describing the action as a "warning shot".