Why Is Covid Vaccine Pass Mandatory? Thousands Protest In France

Covid In France: From Monday, those aged 16 and above will have to show they have been jabbed to access restaurants or bars, leisure activities or use inter-regional public transport. 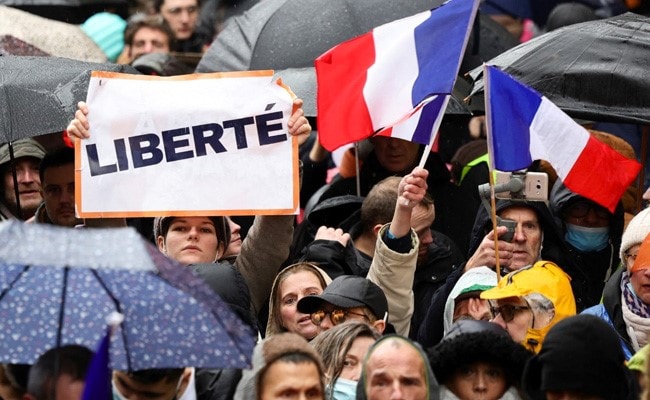 Covid In France: Protesters have been demonstrating against France's Covid health pass.

Some 38,000 people protested across France Saturday, the interior ministry said, two days before a vaccination health pass becomes mandatory to take part in much of public life.

From Monday, those aged 16 and above will have to show they have been jabbed to access restaurants or bars, leisure activities or use inter-regional public transport.

A negative Covid test will no longer be sufficient, except to access health services.

Opponents of the policy say the reinforced measures will impinge upon daily "freedoms" and have railed against what they dub a form of social "apartheid".

An estimated 5,200 demonstrated in Paris, the ministry said, at rallies largely attended by supporters of the nationalist, anti-EU presidential candidate Florian Philippot.

Some demonstrators brought their children along and many of those marching did not wear masks as they waved French flags and bore banners demanding "freedom".

Sophie, a 44-year-old legal worker, and Franck, a 56-year-old IT worker, told AFP they had had their jabs but were against their daughter being pressured into also being vaccinated.

Sophie insisted the time had come to put faith in collective immunity two years into the pandemic.

In Bordeaux in the southwest, Anaelle, a nurse, denounced compulsory vaccination as "shameful".

"People who've been vaccinated get sick, so what's the point?" she asked.

Although the size of protests has dropped off in recent weeks, a hard core remain angry at French President Emmanuel Macron, who has made it clear he wants to put pressure on the unvaccinated until they accept a coronavirus shot.