Four dead, one wounded after hospital shooting in Germany 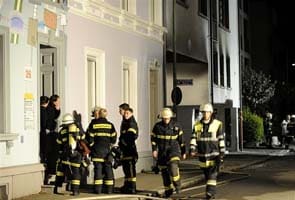 Berlin: A prosecutor says four people have died and a policeman has been seriously wounded in a town in southwestern Germany after an explosion in an apartment building and a shooting in the neighbouring hospital.

Loerrach prosecutor Dieter Inhofer told ZDF public television that two people were found dead in an apartment building that burst into flames after an explosion on Sunday afternoon.

Promoted
Listen to the latest songs, only on JioSaavn.com
Inhofer said another woman, allegedly armed with a weapon, was seen running from the blast into the neighboring St. Elisabeth hospital, where she reportedly opened fire, killing a member of the hospital staff.

Inhofer said the woman then turned her gun on officers responding to the shooting and was killed in an exchange of gunfire. One police officer was seriously wounded.