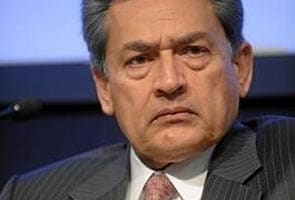 New York: Former-Goldman Sachs director Rajat Gupta turned himself in on Wednesday to the FBI, and then pleaded not guilty in court to massive securities fraud before being freed on $10 million bail pending trial.

The indictment of the biggest fish yet in a growing insider trading scandal reverberated around Wall Street, where more than 50 fraudsters have been netted since 2009 in an intensifying crackdown by prosecutors.

Gupta's appearance in a Manhattan courtroom was a stunning turnaround for the former managing director of consulting powerhouse McKinsey & Company -- a corporate giant who sat on the boards of Goldman Sachs and Procter & Gamble.

Indian-born Gupta stands accused of being the "illegal eyes and ears" of Sri Lankan-born friend Raj Rajaratnam, who turned a tidy profit by buying or selling Goldman shares in his multi-billion-dollar hedge fund complex Galleon. (Read: Who is Rajat Gupta?)

Gupta was charged on Wednesday with five counts of securities fraud and one count of conspiracy to commit securities. The judge freed him on bail but kept his passport, setting a trial date of April 9.

The 62-year-old, who is also know for his philanthropic work through the Bill and Melinda Gates Foundation and The Global Fund, faces over 100 years in prison and a $25 million fine if found guilty. (Watch:The rise and fall of IIT alumnus Rajat Gupta)

"We wish to enter a plea of not guilty to all charges," Gupta's star white-collar defense lawyer Gary Naftalis told the court, dismissing the allegations earlier as "totally baseless."

Recorded phone calls between the two men were played at the trial of Rajaratnam, who earlier this month received the heaviest US sentence for insider trading, 11 years, still far below what prosecutors had sought.

Prosecutors said Gupta tipped Rajaratnam about Warren Buffett's surprise $5 billion investment in Goldman Sachs during the financial crisis, allowing Rajaratnam to profit from trade before the market knew about the transaction.

He also allegedly told Rajaratnam in advance when Goldman was about to post its first ever quarterly earnings loss, another major event on the market.

Gupta is alleged to have placed a call to Rajaratnam 23 seconds after the board meeting ended, prompting the Galleon owner to sell his entire holding of Goldman Sachs stock, saving millions of dollars for his hedge funds.

Manhattan US Attorney Preet Bharara said Gupta had squandered the trust of some of America's top companies to help Rajaratnam, "who reaped enormous profits from Mr. Gupta's breach of duty."

The insider trading by Rajaratnam and others produced more than $18 million in illicit profits and loss avoidance, according to the Securities and Exchange Commission.

"The conduct alleged is not an inadvertent slip of the tongue by Mr Gupta," said FBI Assistant Director-in-Charge Janice Fedarcyk.

"His eagerness to pass along inside information to Rajaratnam is nowhere more starkly evident than in the two instances where a total of 39 seconds elapsed between his learning of crucial Goldman Sachs information and lavishing it on his good friend.

"That information (captured by the FBI) was conveyed by phone so quickly, it could be termed instant messaging."

Gupta was allegedly a direct or indirect investor in some of the Galleon hedge funds.

Naftalis insisted Gupta was innocent and would fight the charges.

"The facts demonstrate that Mr Gupta is an innocent man and that he has always acted with honesty and integrity," the attorney said.

"He did not trade in any securities, did not tip Mr Rajaratnam so he could trade, and did not share in any profits as part of any quid pro quo."

Rajaratnam was also slapped with new charges in Wednesday's indictment but it was not immediately clear if he could face another trial and more time on his sentence, which he begins next month.

Gupta, who comes from humble roots in Kolkata and worked his way up to the very top of McKinsey, joined the Goldman board in November 2006.

The naturalized US citizen became chairman of the International Chamber of Commerce last July.

A Harvard Business School graduate, he has been affiliated with a number of organizations, including the United Nations, where former secretary-general Kofi Annan tapped him in 2005 as his special advisor for management reform.