Forever 21 has obtained $275 million in financing from lenders with JP Morgan Chase as agent, as well as $75 million in new capital from TPG Sixth Street Partners 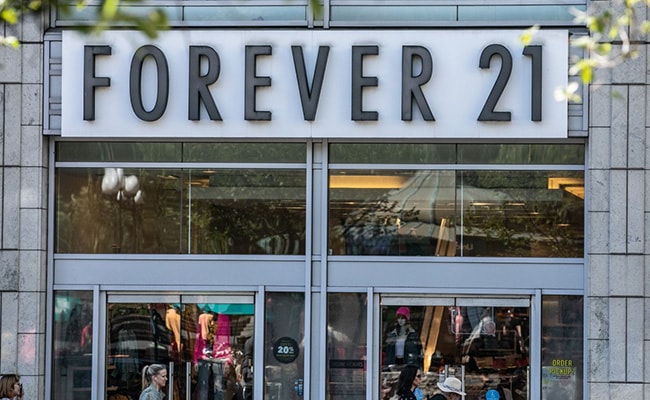 Forever 21 operates about 800 stores in the U.S., Europe, Asia and Latin America.

Forever 21 Inc. filed for bankruptcy protection, the latest big fashion merchant who couldn't cope with high rents and heavy competition as the shift to e-commerce cut a swathe through traditional retailers.

The Chapter 11 filing in Wilmington, Delaware, allows the Los Angeles-based company to keep operating while it works out a plan to shut unprofitable stores in the U.S., pay its creditors and turn around the business. Forever 21 operates about 800 stores in the U.S., Europe, Asia and Latin America.

Once popular among teenagers in the 2000s for its affordable but eye-catching designs, Forever 21's signature bright-yellow shopping bags have become a rarer sight as Generation Z consumers -- those born from 1998 onwards -- shifted rapidly over to e-commerce and streetwear brands in recent years. The bankruptcy filing could help Forever 21 get rid of unprofitable stores and raise fresh funds, allowing the private, family-held company to restructure its flailing business for a new generation.

Forever 21 has obtained $275 million in financing from lenders with JPMorgan Chase as agent, as well as $75 million in new capital from TPG Sixth Street Partners and its affiliated funds. It plans to exit most of its international locations in Asia and Europe, but will continue operations in Mexico and Latin America. The stores expect to honor gift cards, returns and exchanges.

"The financing provided by JPMorgan and TPG Sixth Street Partners will arm Forever 21 with the capital necessary to effect critical changes in the U.S. and abroad to revitalize our brand and fuel our growth, allowing us to meet our ongoing obligations to customers, vendors and employees," Linda Chang, executive vice president of Forever 21, said in a statement.

The bankruptcy filing followed months of discussions with stakeholders over how to turn around the business. Chief among those parties are the retailer's biggest landlords, including mall owners Simon Property Group Inc. and Brookfield Property Partners.

Forever 21 held talks with Simon and Brookfield over a pre-bankruptcy deal that would have handed them a stake in the company in exchange for considerations that could have included rent forgiveness, Bloomberg News reported earlier this month. Those talks, however, broke down, and by last week the company prepared for court proceedings without a deal in hand, Bloomberg reported Sept. 27.

Forever 21 is negotiating with its largest landlords to "right size" its store footprint, the company's chief restructuring officer, Jonathan Goulding of Alvarez & Marsal, said in a court declaration. While the parties have swapped proposals, he said, they haven't reached a deal. Just four landlords hold almost 50% of the company's leases, he said.

Court papers filed in Wilmington, Delaware, show Forever 21 has estimated liabilities on a consolidated basis of between $1 billion and $10 billion. It employs about 6,400 full-time and 26,400 part-time workers, Goulding said. The company has filed a motion asking for court permission to pay employees, typical in first-day bankruptcy hearings.

Bloomberg first reported Aug. 28 that Forever 21 was preparing for a bankruptcy filing.

Forever 21's bankruptcy filing could be problematic for major U.S. mall owners, including Simon and Brookfield because it is one of the biggest mall tenants still standing after a wave of bankruptcies. The busts emptied more than 12,000 stores in the past two years, and those vacancies may be hard to fill.

Simon counts Forever 21 as its sixth-largest tenant excluding department stores, with 99 outlets covering 1.5 million square feet as of March 31, according to a filing.

Simon and Brookfield were both listed in court papers on Forever 21's tally of biggest unsecured creditors. The retailer doesn't have a lot of leverage over its landlords, according to Bloomberg Intelligence, which said in a Sept. 27 report that Forever 21 accounts for just 1.4% of Simon's annual rent.

Founded in 1984, Forever 21 specializes in fast-fashion apparel-- trendy, cheap, quickly-made knockoffs of original designs that often is worn only a few times before being given away or tossed out. Competitors include Zara, H&M and Amazon.com.

Co-founder Do Won Chang has been focused on maintaining a controlling stake in Forever 21, which hindered efforts to raise new funds. Matters are likely to be out of his hands now, with creditors typically setting the agenda in bankruptcy proceedings and major decisions subject to a judge's approval.

Kirkland & Ellis is the company's legal adviser, and Alvarez & Marsal is the restructuring adviser, and the investment banker is Lazard.

(Except for the headline, this story has not been edited by NDTV staff and is published from a syndicated feed.)
Comments
Forever 21 Inc.Forever 21 Inc. bankruptcyfashion retailer