For Grizzly Bear Hunt, Man Intends To Shoot Them. But Not With A Gun

Thomas Mangelsen, who has lived near Grand Teton National Park for four decades, said in an interview this week that he will use the permit to shoot bears as he's always done -- with a camera, not a gun. 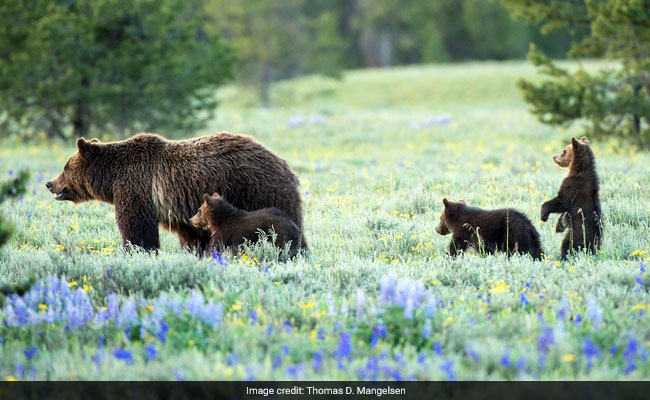 The largest grizzly hunt in the Lower 48 in more than 40 years is set to open next month in Wyoming, and more than 7,000 people applied for a chance to kill one of up to 22 bears. Among the tiny number of people who won the draw for permits is a wildlife photographer who has produced some of the most famous images of the area's grizzlies.

Thomas Mangelsen, who has lived near Grand Teton National Park for four decades, said in an interview this week that he will use the permit to shoot bears as he's always done -- with a camera, not a gun.

Mangelsen's luck in the lottery followed a campaign spearheaded by local hunt opponents to encourage like-minded people to apply for permits in hopes of preventing the death of at least one member of the Yellowstone area's grizzly population, which was removed from the endangered species list in 2017. Amid a hugely contentious debate over the hunt, their tactic is being hailed by some as a heroic protest and scorned by others as starry-eyed thievery of an opportunity that hunters deserve.

"Well, what other way are we going to do it?" said Mangelsen, 72, referring to hunt critics. "We've petitioned the government, we've gone to the meetings, we've talked and we've testified, we've gone to legislators. . . . We have a right to protest in whatever way we feel is necessary."

Grizzly 399 has proven elusive lately, so I thought I would share one of the better images from the first day I saw her and the yearlings two weeks ago. There is some other, exciting bear news to share, so stay tuned!

Their approach was possible because of regulations in the six hunting areas closest to Grand Teton and Yellowstone national parks, prime grizzly habitat where federal biologists track the species' population. There, up to 10 hunters will be allowed into the field, one at a time, for 10 days each. The hunt in those areas will end when the first female is killed or after 10 males are killed.

In two other areas that are farther from parks and more populated by humans, up to 12 bears, male or female, can be killed. Hunting is not allowed in the parks, on the road that connects them or in a no-hunt buffer zone in a region east of Grand Teton.

Serendipity! This morning I was absolutely floored to learn that I drew #8 in Wyoming's grizzly bear hunt "Issuance List", in all likelihood getting a tag. The odds of winning a tag were extremely low considering over 7,000 people applied. There are certain circumstances that would keep me from getting in the field, but if given the opportunity, you can be sure that I will be buying the $600 license and spending all of the allotted ten days hunting with a camera. With only one person allowed in the field at one time, hopefully the ten days I take up will save the lives of some of these amazing animals.

Mangelsen is No. 8 on the permit list for the closer areas, which means his turn will come up only if none of the first seven hunters has killed a female bear. But he and organizers of the campaign said another supporter, a woman who lives in the Jackson Hole, Wyoming, area, drew the No. 2 spot and also planned to pay the $600 resident fee for a permit.

"That will be 10 days that another hunter will not be in the field," Mangelsen said. "We might be able to save a couple bears."

Yellowstone grizzlies were placed on the endangered species list in 1975, when the federal government estimated that just 136 remained. The population has since rebounded to about 700, and the bears are now spreading far beyond the parks, where threats include collisions with cars and conflicts with humans over property and livestock. Federal and state biologists say limited hunting will not imperil the population. Idaho also approved a hunt of a single male grizzly; Montana, the third state that abuts Yellowstone, considered but rejected a grizzly hunt this year.

While mom (Blondie) grazes on biscuitroot just out of frame, her two yearling cubs wrestle and rough-house between nursing breaks. There's nothing quite like watching rambunctious bear cubs. Happy Friday!

Mangelsen is one of the best-known chroniclers of what he calls the Yellowstone area's "rock star bears." They include 399, a female grizzly he first spotted in 2006 who has produced dozens of offspring often seen with her near roads in Grand Teton, where tourist gawking regularly leads to "bear jams" -- lines of cars stopped while passengers get an up-close look at an iconic American species.

He said 399 and others like her underpin his opposition to the hunt. Because elk hunting is allowed in and around Grand Teton, the grizzlies are accustomed to scavenging gut piles and consider the sound of a gunshot to be a "dinner bell" rather than a threat, he said. That would make them easier targets during a hunt.

While there's a chance 399 could venture into the hunting areas, Mangelsen said. some of the large males she's mated with, named Bruno and Brutus by local fans, are known to go to those areas. Their size would make them coveted trophies, he said.

I have been out of town recently, but wanted to pass along some good news about Grizzly 399. She was seen briefly about a week ago. It appears her and her two cubs made it through the winter in great shape. She has since disappeared, but will hopefully reappear soon. I look forward to seeing her again and sharing some current images.

Wyoming officials said that the non-hunter attempts to win permits violated no rules. But they clearly weren't delighted about the idea.

"We think we should all be grateful that over the last four decades hunters and anglers spent nearly $50 million to recover grizzly bears to ensure there is an opportunity for people to see and photograph grizzly bears in northwest Wyoming," Renny MacKay, a spokesman for the Wyoming Game and Fish Department, said in an email before the permit draw. "It is important to consider the fact that they did this during a time when those folks were using the resource by taking pictures of bears, not by hunting them."

The tactic has been mocked and lambasted by hunters and other critics who say the grizzly harvest is scientifically supported and argue that bears are becoming too populous and assertive in some areas. Sy Gilliland, a hunting guide, told USA Today that it was "like being Monday-morning quarterbacked by people who don't really have a clue what's happening on the ground."

Despite the harsh light and heat distortion, I thought I would still share this image from earlier today, as it was my first sighting of Grizzly 399 this year. Happy to see she and her cubs made it through the winter in great shape!

Mangelsen, who has also long protested cougar hunting, argues that taxes on photographers' equipment, as well as tourist money, also fund state conservation coffers. (Federal dollars, too, go toward endangered species' recovery.) But he said he was heartened that the computer-run lottery gave him a chance to win and pay for a permit, even though he disagrees with how the state might use his $600 to manage wildlife.

"Managing by killing things is kind of archaic," he said. "We always thought maybe [the draw] could be skewed. But the fact that I got it -- probably the least likely person in Wyoming to get a bear tag -- we have to say that, well, Tom got a tag, so it must not be skewed."

There remains a chance that the hunt will be canceled. Several lawsuits have challenged the delisting of Yellowstone-area grizzlies, and a U.S. district court judge earlier this year ordered all parties to combine their arguments into a single set of briefs. A hearing is scheduled for Aug. 30, just before the September start of hunting seasons in Wyoming and Idaho.