Bus Carrying Chinese Tourists Crashes in the US 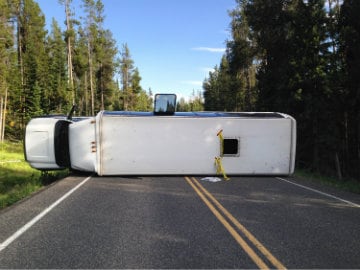 This Thursday, July 10, 2014 photo provided by the Grand Teton National Park shows a bus that flipped on its side.

Officials say 19 other people aboard were examined at a hospital and released after the crash Thursday.

The eight injured people were listed in good or fair condition at two medical centers in Wyoming and Idaho.

Park spokeswoman Jackie Skaggs says investigators believe the bus went off the pavement and flipped on its side when the driver overcorrected.

The driver was among those taken to a hospital. His condition wasn't immediately known.

Promoted
Listen to the latest songs, only on JioSaavn.com
Skaggs says most of the passengers were from China.