For Six Decades, 'The Man With The Golden Arm' Donated Blood - And Saved 2.4 Million Babies

James Harrison didn't know why his blood contained a rare antibody. He just felt compelled to keep giving it. 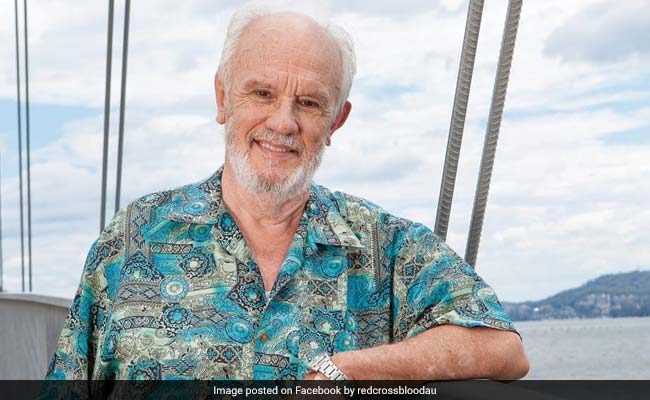 In 2003, James Harrison landed in the Guinness Book of World Records.

In 1951, a 14-year-old Australian boy named James Harrison awoke from a major chest operation. Doctors had removed one of his lungs in a procedure that had taken several hours - and would keep him hospitalized for three months.

But Harrison was alive, thanks in large part to a vast quantity of transfused blood he had received, his father explained.

"He said that I had 13 units of blood and my life had been saved by unknown people," Harrison told CNN's Sanjay Gupta decades later.

At the time, Australia's laws required blood donors to be at least 18 years old. It would be four years before Harrison was eligible, but he vowed then that he too would become a blood donor when he was old enough.

After turning 18, Harrison made good on his word, donating whole blood regularly with the Australian Red Cross Blood Service. He disliked needles, so he averted his eyes and tried to ignore the pain whenever one was inserted into his arm.

Meanwhile, doctors in Australia were struggling to figure out why thousands of births in the country were resulting in miscarriages, stillbirths or brain defects for the babies.

"In Australia, up until about 1967, there were literally thousands of babies dying each year, doctors didn't know why, and it was awful," Jemma Falkenmire, of the Australian Red Cross Blood Service, told Gupta. "Women were having numerous miscarriages, and babies were being born with brain damage."

The babies, it turned out, were suffering from Haemolytic Disease of the Newborn, or HDN. The condition most often arises when a woman with an Rh negative blood type becomes pregnant with a baby who has Rh positive blood, and the incompatibility causes the mother's body to reject the fetus's red blood cells.

Doctors realized, however, that it might be possible to prevent HDN by injecting the pregnant woman with a treatment made from donated plasma with a rare antibody.

Researchers scoured blood banks to see whose blood might contain this antibody - and found a donor in New South Wales by the name of James Harrison.

By then, Harrison had been donating whole blood regularly for more than a decade. He has said he didn't think twice when scientists reached out to him to ask if he would participate in what would become known as the Anti-D program.

"They asked me to be a guinea pig, and I've been donating ever since," Harrison told the Sydney Morning Herald.

Before long, researchers had developed an injection called Anti-D using plasma from Harrison's donated blood. The first dose was given to a pregnant woman at Royal Prince Alfred Hospital in 1967, according to Robyn Barlow, the Rh program coordinator who found Harrison.

Harrison continued donating for more than 60 years and his plasma has been used to make millions of Anti-D injections, according to the Red Cross. Because about 17 percent of pregnant women in Australia require the anti-D injections, the blood service estimates Harrison has helped 2.4 million babies in the country.

"Every ampul of Anti-D ever made in Australia has James in it," Barlow told the Sydney Morning Herald. "He has saved millions of babies. I cry just thinking about it."

Scientists still aren't sure why Harrison's body naturally produces the rare antibody but believe it is related to the blood transfusions he received as a teenager. And through the decades, Harrison has brushed off excessive praise regarding his regular trips to the blood donation center from his home in Umina Beach, on the Central Coast of New South Wales.

He had "never" considered stopping, he told the Daily Mail in 2010.

"Probably my only talent is that I can be a blood donor," Harrison remarked wryly to CNN's Gupta in 2015, when the network followed him as he made his 1,101st donation that year.

At the blood donation center, he greeted the nurses who had come to know him so well. As always, he looked away when they inserted the needle and spent the duration of the appointment gripping an orange stress ball in his right arm.

When a reporter asked if what he was doing was courageous, Harrison squeezed his eyes together and shook his head.

"That's the other rare thing about James," Falkenmire told the network then. "He thinks his donations are the same as anybody else's. He doesn't think he's remarkable."

Countless others think Harrison is remarkable, though. Somewhere along the way, he picked up the nickname "The Man With the Golden Arm," along with accolades large and small, from the Medal of the Order of Australia in 1999 to the cover of his local yellow pages in 2013.

In 2003, he landed in the Guinness Book of World Records.

But in interviews, Harrison has said by far the most fulfilling part of his unwavering commitment to donate plasma has been the babies he has helped save - including his own grandchildren.

On Friday, Harrison made his final trip to the blood donation center. At age 81, he had already passed the age limit allowed for donors, and the blood service had decided Harrison should stop donating to protect his health, the Sydney Morning Herald reported.

As Harrison sat in the donation chair, four silver mylar balloons - with the numbers 1, 1, 7, 3 - bobbled above him, representing his 1,173 total blood donations in his lifetime. Several parents had shown up at the hospital to mark the occasion - holding some of the babies his donations had helped save.

Barlow, the Rh program coordinator who had found Harrison decades ago, gave him a long, emotional hug.

"We'll never see his kind again," Barlow told the Sydney Morning Herald. "That he has been well and fit and his veins strong enough to continue to donate for so long is very, very rare."

Blood service officials said their hope is that more blood donors will step forward; perhaps there will be another James Harrison among them. Currently only about 200 donors qualify for the Anti-D program.

Harrison told the Red Cross that he is eager for his legacy of 1,173 donations to be surpassed.

Promoted
Listen to the latest songs, only on JioSaavn.com
"I hope it's a record that somebody breaks, because it will mean they are dedicated to the cause," Harrison said.

No Angora Wool, Please: This Fashion House Now Has A Fur-Free Policy