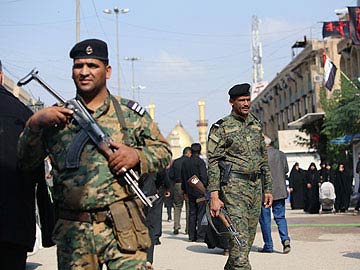 Riyadh/Baghdad: Six mortar bombs landed near a border post in northern Saudi Arabia in an attack claimed by an Iranian-backed Iraqi Shi'ite militia, which said on Thursday, it was warning the kingdom to stop meddling in Iraqi affairs.

The mortar rounds hit desert on the far northwestern fringes of the kingdom's oil-producing region on Wednesday, several hundred kilometres (miles) from the major fields operated by the world's largest oil exporter and biggest Arab economy.

"The goal was to send a warning message to Saudis to tell them that their border stations and patrol are within our range of fire," Wathiq al-Batat, commander of Iraq's al-Mukhtar Army militia, told Reuters in Baghdad by telephone.

He said the militia wanted Riyadh to stop "interfering" in Iraq and that it had also been angered by Saudis and Kuwaitis who he said had insulted the Prophet Mohammad's daughter.

There was no independent confirmation that the militia was behind the mortar fire, reported two days after twin suicide bombings killed 25 people near Iran's embassy in Beirut. Some Shi'ite commentators blamed that assault on Iran's regional rival Saudi Arabia, which has condemned the Beirut attack.

Iran has not commented on the mortar attack on Saudi Arabia.

Saudi Interior Ministry spokesman Major-General Mansour Turki said Iraq and Kuwait, as well as the kingdom itself, were investigating the mortar fire. Baghdad said it was not involved.

"There were no rockets or anything fired towards the Saudi border by security forces," said Jabar al-Sa'adi, head of Basra provincial council's security committee, in southern Iraq.

Turki said Saudi forces had not been put on higher alert after the bombardment.

Saudi news website sabq.org published pictures of small craters in the desert which it said the mortar fire had caused. A high barbed-wire fence and a road were visible in some photos.

Al-Mukhtar Army is a relatively new Shi'ite militia, which has said it is supported and funded by Iran. Batat is a former leader of the more well-known Kata'ib Hezbollah militia.

"This is just the beginning and there will be more attacks if they (the Saudis) do not stop," he said.

"The timing is linked to the attack on the embassy (in Beirut), he said, adding that the group might also have been trying to sabotage a call this month by Iraqi Prime Minister Nouri al-Maliki for better ties with Saudi Arabia.

Sunni Muslim Saudi Arabia, a close ally of Kuwait, has had tense relations with the Shi'ite-led Iraqi government, which it views as a pawn of Iran. It has not had an ambassador based in Baghdad since before the 1990-91 Gulf crisis.

Sectarian fighting in Iraq since the U.S.-led invasion in 2003 has involved Sunni militants close to al Qaeda as well as Shi'ite militias which have no love for Saudi Arabia.

Some Iraqi Shi'ites support Syrian President Bashar al-Assad in his 2-1/2-year-old struggle to crush what has become an armed revolt by mainly Sunni rebels, some of them backed by Riyadh.

The conflict has aggravated Sunni-Shi'ite antagonism across the region, not least in Syria's smaller neighbour Lebanon, where Iran and Saudi Arabia have long vied for influence.

A Lebanon-based Sunni group linked to al Qaeda has claimed responsibility for the Iran embassy attack in Beirut.

Promoted
Listen to the latest songs, only on JioSaavn.com
The Saudi border area with Iraq and Kuwait lies deep in a largely unpopulated desert. The kingdom has installed fences along its long frontier with Iraq, about 60 km (38 miles) of which runs along the edge of Eastern Province, which is home to many of Saudi Arabia's own substantial Shi'ite minority.

The kingdom has oil facilities in the Neutral Zone it shares with Kuwait, more than 100 km (62 miles) from Hafr al-Batin, but its main oil and gas fields are much further to the southeast.
© Thomson Reuters 2013