The fight that saw dozens of participants was captured on camera and soon went viral. 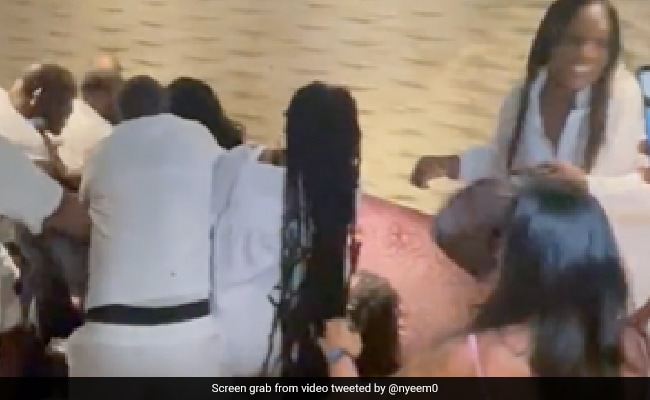 The chaotic fight was caught on camera by a few passengers who shared the clips on social media.

Things took a rather never-seen-before ugly turn on the Carnival Magic cruise ship earlier this week when dozens of passengers got involved in an hour-long fight. The chaotic fight was caught on camera by a few passengers who shared the clips on social media.

According to Ms James, the chaotic fight began way past midnight, at about 2 am on the fifth floor, near the ship's dance club and casino. The travel agent also estimated that at one point as many as 60 passengers were active participants in the fight.

Ms James further confirmed that the security staff of the cruise intervened and tried to reign in the “ignorant fools acting stupid”.

And, like most fights, this one too left behind a mound of rubble and debris, as per the videos circulated on social media.

The clip, shared by another passenger on Twitter, gives users a close look at the spirited participants and the fight. Sharing the video, the person wrote succinctly, “Last night's festivities on my carnival cruise.”

The video has clocked over 1,68,300 views on the micro-blogging site.

Replying to the post, a user asked the question that was on everyone's mind, “So why were the other 57 people fighting?”

While several users threw in their guesses, no one was able to explain why 60 passengers were involved in the fight.

As per NBC, the cruise ship was returning to New York after an eight-day tour covering the Dominicana, Turks, Caicos and a private island in the Bahamas.

Following the fight, the Coast Guard was notified by the cruise officials. As a result, a boat from Staten Island escorted the ship the rest of the way to the pier.

Acknowledging the incident, Carnival Magic admitted that "a number of guests were involved in an altercation in a nightclub.” The cruise line's statement further said: “Thankfully no serious injuries were reported and our onboard security team intervened. The ship arrived as scheduled this morning and authorities were notified and met the ship to interview suspects and witnesses and conduct an investigation.”

With jurisdictional questions around where the ship was during the fight looming over investigation, there have been no updates on any arrests in connection to the case.