FBI Special Agent Travis Taylor said that a 15-year-old related to investigators that one of the suspects told him the dead 3-year-old, identified as Abdul-Ghani Wahhaj, would return and designate institutions, such as the financial system and law enforcement, for attack. 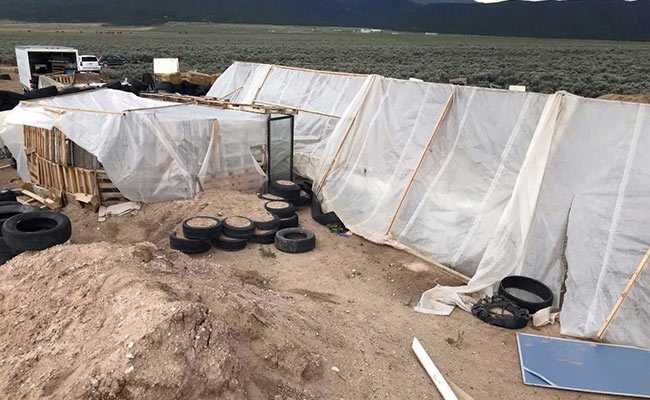 A 3-year-old boy found buried at a New Mexico desert compound died in a ritual to "cast out demonic spirits," but his extended family believed he would "return as Jesus" to identify "corrupt" targets for them to attack, prosecutors said on Monday.

Authorities unearthed the boy's remains at a ramshackle compound north of Taos, three days after an Aug. 3 raid in which investigators found 11 other children alive but malnourished and arrested five adults on charges of abusing them.

At least some of the children, ranging from 1 to 15 years of age, were given weapons training to defend the compound against a possible FBI raid, the court was told.

FBI Special Agent Travis Taylor said that a 15-year-old related to investigators that one of the suspects told him the dead 3-year-old, identified as Abdul-Ghani Wahhaj, would return and designate institutions, such as the financial system and law enforcement, for attack.

"They were awaiting for Abdul-Ghani to be resurrected to let them know which government institutions to get rid of," Taos County Prosecutor John Lovelace said in arguing that bail should be denied for all five defendants.

But state District Judge Sarah Backus rejected prosecutors' request and set bond at $20,000 for each of the suspects.

The adults, including three women who police said were the mothers of the 11 children, were each charged with 11 counts of felony child abuse.

Prosecutors said in court documents filed last week that Lucas Morton and his wife, Subhannah Wahhaj, along with her brother, Siraj Ibn Wahhaj and his spouse, Jany Leveille, and another sister, Hujrah Wahhaj, were training the children to use firearms "in furtherance of a conspiracy to commit school shootings."

Siraj Ibn Wahhaj, 39, the son a prominent New York-based Muslim cleric, also was charged in the alleged abduction of his son Abdul-Ghani from his mother's Atlanta home last December.

A cross-country search for the missing boy and his father led investigators to the 10-acre compound on the outskirts of the community of Amalia near the Colorado border.

The children were clothed in rags and starving when they were found, authorities said. The remains of a young boy, believed to be Abdul-Ghani, were found buried at the site three days later.

Authorities encountered Siraj Ibn Wahhaj, Leveille and seven of the children last December when they were in a traffic accident, and police found weapons in the vehicle, including pistols, an AR-15 rifle and ammunition magazines, Lovelace said.

According to Lovelace, Wahhaj told police at the time that he had the guns because he worked for an executive security business and that he was going on a camping trip in New Mexico.

In describing what the children said about the death of Abdul-Ghani Wahhaj, Lovelace said, "It was a religious ritual carried out on Abdul-Ghani, a ritual intended to cast out demonic spirits" from him.

During Monday's hearing, prosecutor Timothy Hasson said that Siraj Ibn Wahhaj had sent his brother a letter that was "an invitation to come to the compound and pursue his intent to become a martyr."

He added, "In the 21st century I think we all know what that means.

(Except for the headline, this story has not been edited by NDTV staff and is published from a syndicated feed.)
Comments
New Mexico compound3-year-old found dead