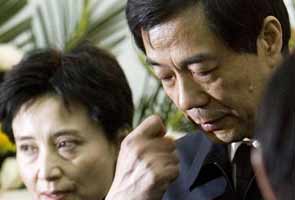 A file picture of Bi Xila and his wife

Beijing: Disgraced former top Chinese politician Bi Xilai can be expected to mount a feisty defence of himself when he finally comes to trial, but a guilty verdict is not in doubt, a lawyer who had a front seat at China's last major show trial said.

Zhang Sizhi was defence lawyer for Mao Zedong's widow, Jiang Qing, leader of the "Gang of Four" that wielded supreme power during the 1966-76 Cultural Revolution. She was given a suspended death sentence in 1981 for the deaths of tens of thousands during that period of chaos.

As such, Zhang was witness to Jiang's spirited though ultimately fruitless defence, and thinks Bo could do the same.

"Bo Xilai will be given the right to defend himself, but will he be able to use it? I cannot say for certain," the still sprightly Zhang told Reuters in an interview in his spartan apartment in central Beijing late on Wednesday.

"I would expect though that he will defend himself to the fullest extent, according to what I know about the man," said the 85-year-old.

There is little doubt about a guilty verdict.

"It will be another show trial," Zhang said.

Bo, 63, was widely seen as a contender for top leadership before his career unravelled after his former police chief, Wang Lijun, fled to a U.S. consulate for more than 24 hours in February and accused Bo's wife, Gu Kailai, of murdering a British businessman.

Gu and Wang have both been jailed over the scandal stemming from the murder of Neil Heywood. In September, the government accused Bo of corruption and of bending the law to hush up the murder.

While formal charges have yet to be filed, China's prosecutors and courts come under party control and are most unlikely to challenge the party's accusations.

The Bo scandal has rocked Beijing, exposing rifts within the party - elements of which are strong supporters of Bo's populist, left-leaning policies - at a time when the country is preparing for a once-in-a-decade leadership change.

"Her killing herself was a political act. She did not fear death," he said. "Gu is not like this. She's just a little girl."

Zhang, who was sent to toil on a farm during the Cultural Revolution, has never given up his fight for legal and political reform in China.

Zhang has campaigned against censorship and, more recently, lobbied for Wu Ying, a self-made businesswoman convicted in a multi-million dollar scheme to bilk investors, in a contentious fraud case that sparked sympathy for the peasant's daughter. Her death sentence was overturned this year.

With China approaching the leadership change at a Communist Party Congress which opens in Beijing next week, calls for reform have grown in state media and amongst government-linked academics.

But Zhang said he was pessimistic, especially for legal reform in a country where courts are controlled by the party.

"The most important reform China needs to become a country with rule of law is independence of the judiciary," he said.

"I don't talk about this very often for one reason - it will not happen ... It cannot happen as long as we live in a one-party state."
© Thomson Reuters 2012
Comments
Bo Xilai