A Former US Basketball Player May Go To Singapore For US-North Korea Summit. Here's Why

Rodman's agent, Chris Volo, who has accompanied the basketball player on four of his five trips to North Korea, said in a phone call with The Washington Post on Wednesday that Rodman "would love to go, but we have a few logistical things" to deal with before the trip can be confirmed. 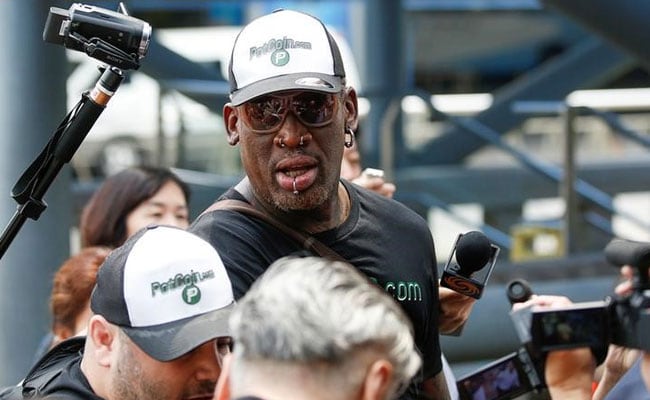 When President Donald Trump and North Korean leader Kim Jong Un meet in Singapore on June 12, a celebrity guest might be present: Dennis Rodman, one of only a few people to have met both Trump and Kim.

Rodman's agent, Chris Volo, who has accompanied the basketball player on four of his five trips to North Korea, said in a phone call with The Washington Post on Wednesday that Rodman "would love to go, but we have a few logistical things" to deal with before the trip can be confirmed.

Volo said Rodman would be an appropriate third party to the summit because he has a relationship with the two leaders: He twice appeared on Trump's TV show, "Celebrity Apprentice," and he has met Kim multiple times. In 2013, he called the North Korean despot his "friend for life."

"I strongly believe they would be very happy if Dennis was there for moral support," Volo said.

Volo said that Rodman and the younger Kim get along because they both love sports and music. "He loves Elvis Presley, Frank Sinatra," Volo said of Kim. "Dennis loves every type of music, and I think that's what really brought them together."

Rodman first visited the isolated state in early 2013 on a trip with members of the Harlem Globetrotters. He returned two more times that year, once in September - when he said he even had the chance to hold Kim's baby daughter -- and again in December, when he put together a team of North Korean basketball players for an exhibition game for Kim's birthday. The game happened in January 2014 and featured North Koreans and former NBA players.

But that trip got a little awkward - not only when footage emerged of Rodman singing "Happy Birthday" to Kim, but also when Rodman went on CNN and ranted at host Chris Cuomo, suggesting that American missionary Kenneth Bae, who was in prison in North Korea, might deserve to be there. "Do you understand what he did in this country?" Rodman asked. "No, no, no, you tell me, you tell me. Why is he held captive here in this country, why?"

Rodman later apologized for the remarks and said in a statement to the Associated Press that he had been drinking and feared his "dreams of basketball diplomacy was quickly falling apart." Bae ended up being released later that year.

The basketball star didn't return to North Korea until 2017, when he traveled to Pyongyang on a trip sponsored by PotCoin, an online currency for cannabis. On that trip, Rodman gave Kim a copy of Trump's first book, "The Art of the Deal."

His visit coincided with North Korea releasing Otto Warmbier, a 22-year-old college student who was arrested in Pyongyang in 2016 on charges of trying to steal a propaganda banner. Warmbier was medically evacuated from North Korea and returned home with severe brain damage. He died a few days later.

Rodman has flip-flopped on what exactly his self-described "basketball diplomacy" means, at some points implying he might discuss politics with Kim, and at others insisting the relationship is lighthearted and apolitical.

But Volo said Rodman thought Trump's letter canceling the scheduled summit - which is now back on - was "brilliant."

"He showed respect, he showed gratitude, he showed strength," he said. "There were a lot of things in that letter that a lot of North Koreans can relate to and respect."

(Except for the headline, this story has not been edited by NDTV staff and is published from a syndicated feed.)
Comments
Dennis Rodman North KoreaKim Jong-UnUS-North Korea Summit