US President Donald Trump announced Thursday that the United States is withdrawing from the Paris climate accord, prompting a furious global backlash and throwing efforts to slow global warming into doubt. 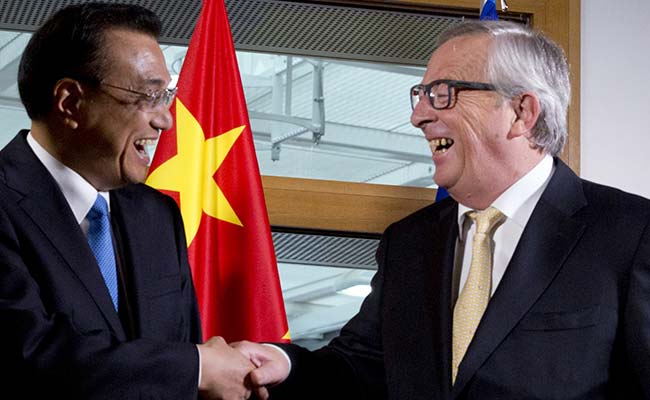 Brussels, Belgium: China and the EU are sending the world a signal there can be "no backsliding" on the Paris climate pact, European Commission chief Jean-Claude Juncker said Friday after the US pullout from the landmark deal.

"Our joint leadership provides business, investors and researchers both in Europe and China and throughout the world the certainty they need to build a global low carbon economy," Juncker said as he opened trade and climate talks with Chinese Premier Li Keqiang in Brussels.

"And it makes a statement to the world: there is no reverse gear to the energy transition, there is no backsliding on the Paris agreement," Juncker said.

In Beijing, Chinese foreign ministry spokeswoman Hua Chunying said her government would uphold the climate pact, adding it was "a responsiblity shouldered by China as a responsible major country."

President Donald Trump announced Thursday that the United States is withdrawing from the Paris climate accord, prompting a furious global backlash and throwing efforts to slow global warming into doubt.

In a sharply nationalistic address from the White House Rose Garden, Trump announced his administration would immediately stop implementing the "bad" 195-nation accord.

Juncker, Li and European Council President Donald Tusk are vowing to forge ahead with the Paris agreement without the US.

Juncker denounced as "seriously wrong" Trump's shock announcement Thursday to pull out of the deal that his predecessor Barack Obama and Chinese leaders had been instrumental in brokering.

Trump's "announcement has galvanised us rather than weakened us, and this vacuum will be filled by new broad committed leadership," Canete said.

"Europe and its strong partners all around the world are ready to lead the way," the Spanish commissioner said on the eve of the summit.

(Except for the headline, this story has not been edited by NDTV staff and is published from a syndicated feed.)
Comments
US President Donald TrumpEuropean UnionParis Climate AccordJean-Claude Juncker