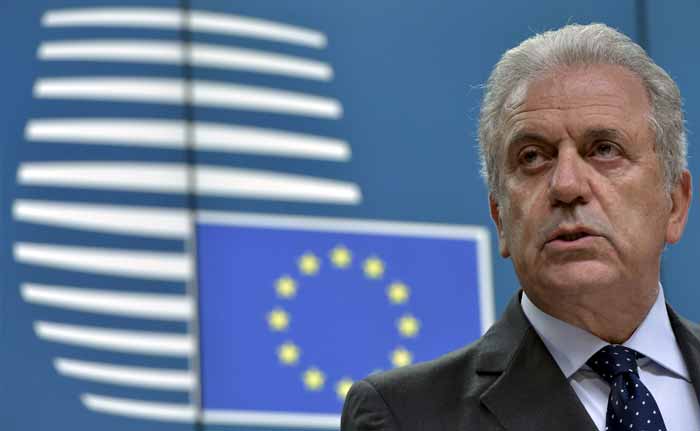 European Commissioner for Migration Dimitris Avramopoulos give a news conference after an emergency meeting on the migrant crisis in Brussels, Belgium, November 9, 2015. (Reuters)

Islamabad: The European Union official in charge of migration was in Pakistan today for talks after the country last week suspended a deal to accept deportations from mainland Europe.

Pakistan's rejection of deportees comes at a time when European leaders facing an influx of migration are desperate to streamline procedures for repatriations.

She added that the one-day visit was planned in advance.

"He's not coming just because of the statements" by Pakistani officials that the country would no longer accept deportees from Europe," she said.

EU nations signed a deal with Pakistan in 2009 allowing them to repatriate illegal immigrants and other nationalities who transited through Pakistan on their way to Europe.

Nisar added that Pakistan would not accept any deportees accused of militant links without clear evidence of guilt.

A spokesman for the ministry later confirmed that the EU repatriation agreement was "temporarily suspended".

The EU has not officially commented on the Pakistani decision, though Avramopoulos was scheduled to speak later today.

Globally, about 90,000 people were deported back to Pakistan last year for a variety of offences, but in some cases they had been sent back without proper determination they were Pakistan nationals, the interior ministry spokesman said.

It was not immediately clear exactly how many came from Europe, although the figure is in the thousands.

Europe is facing its biggest influx of migrants in decades, with many families fleeing war in Syria, Iraq and Afghanistan.

Some European leaders are calling for tighter controls over fears of Islamic State infiltration after attacks in Paris last week killed 130 people and wounded about 200.

Pakistan's refusal to accept deportees could slow down the removal of illegal economic migrants, making it harder to accept those genuinely fleeing persecution.
© Thomson Reuters 2015

Near Death Experience To Party Coup, Australia's New PM Has Seen It All