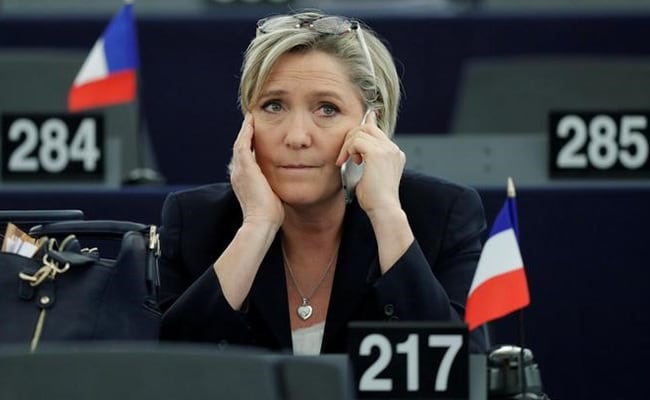 Brussels: European Union lawmakers could summon French far-right presidential candidate Marine Le Pen to discuss the lifting of her immunity over the alleged misuse of European Union money, before the second round of the French election, an influential legislator said on Saturday.

French judges have asked the European parliament to lift the immunity of the National Front leader, who is a member of the EU legislature, to permit further investigations over alleged misuse of funds to pay for party assistants.

"The legal affairs committee has agreed that Le Pen will be summoned for a hearing on the first possible date in May," Laura Ferrara, the deputy chair of the committee, told Reuters.

She said the hearing could take place in the first week of May, before the May 7 runoff in the French election, which polls show Ms Le Pen is likely to reach.

Ms Le Pen has denounced legal proceedings against her as political interference.

Opinion polls have put Ms Le Pen in first or second place in the first round of voting on April 23, although her three main rivals are now close enough for any two of the four to go through to the runoff.

Polls show Ms Le Pen is not likely to win the runoff.

Ms Ferrara, who is a member of the Italian eurosceptic 5 Star Movement, said that Ms Le Pen may decide not to appear before the parliamentary committee.

The European parliament has already sanctioned Ms Le Pen for misusing EU funds. Since February her monthly salary as EU lawmaker has been cut by half to around 3,000 euros and other allowances have been withdrawn. The French investigation is aimed at establishing whether other sanctions are warranted.

The EU legislature lifted Ms Le Pen's immunity in March to allow a separate French investigation over her posting of pictures of ISIS violence on social media, an offence that in France can carry a penalty of three years in prison and a fine of 75,000 euros ($79,567).

Before deciding to lift the immunity of a lawmaker, the EU parliament's legal affairs committee usually arranges a hearing with the accused legislator. The actual decision follows a few months later.

In the majority of cases, the immunity has been lifted.