Police said the alarm was first sounded in Manhattan around 7:00 am when a passenger saw a cooker abandoned at the Fulton Street subway station near the World Trade Center. 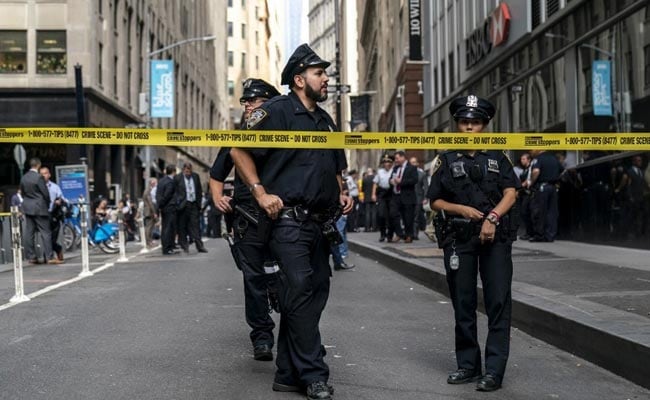 NYPD officers after reports of a suspicious package near the Fulton Street subway station. (AFP)

New York went on alert for two hours Friday during the morning rush hour because of three suspicious objects that turned out to be empty rice cookers.

Police said the alarm was first sounded in Manhattan around 7:00 am (1100 GMT) when a passenger saw a cooker abandoned at the Fulton Street subway station near the World Trade Center -- a neighborhood rebuilt after the September 11 attacks in 2001.

A second rice cooker was found in an another part of the same station.

The station was quickly evacuated, service on two subway lines was suspended and trains on other lines serving Fulton Street bypassed the station.

As police announced the objects turned out to be harmless, a third suspicious object was detected on 16th Street in the Chelsea district further to the north.

It, too, turned out to be a rice cooker, said John Miller, the New York Police Department's deputy commissioner for intelligence and counterterrorism.

It was in Chelsea that a pressure cooker containing a homemade explosive device detonated in September 2016, injuring 31 people and triggering panic in a city that had not endured an attack since 9/11.

Ahmad Rahimi, an Afghan-born man who sympathized with jihadist causes, was sentenced to life in prison over that incident. He had actually placed multiple bombs across New Jersey and Manhattan, but only one caused any damage.

Surveillance camera footage showed the two rice cookers found at the Fulton Street station were placed there by the same man, who took them out of a shopping cart, said Miller.

Authorities are now looking for that man.

Miller said he did not know if the third cooker was linked to the first two, although they were all the same model.

Since the attack by Rahimi, the US financial capital has been hit by two other attacks.

In October 2017, an Uzbek man named Sayfullo Saipov used a truck to run over bikers and pedestrians on a bike path in Manhattan, killing eight people and injuring 12.

His trial is scheduled for April of next year. If convicted, Saipov could face the death penalty.

He was found guilty of terrorism-related offenses and will be sentenced on September 10.

(Except for the headline, this story has not been edited by NDTV staff and is published from a syndicated feed.)
Comments
New York alertBomb scarerice cookers