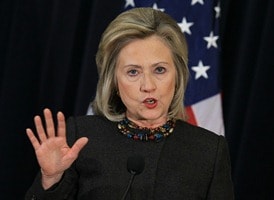 Washington: US Secretary of State Hillary Rodham Clinton has issued a sharp criticism of attacks on journalists, peaceful demonstrators, human rights activists and diplomats in Egypt.

Clinton said the attacks violated international norms on freedom of the press.

Without directly blaming President Hosni Mubarak's regime, she said, "It is especially in times of crisis that governments must demonstrate their adherence to these universal values."

She said Egypt's government and army must provide protection and hold accountable those responsible for the attacks.

Promoted
Listen to the latest songs, only on JioSaavn.com
Clinton said journalists must be allowed to report on the demonstrations.

She urged Vice President Omar Suleiman to include a "broad and credible representation of Egypt's opposition" in a transition toward free and fair elections.