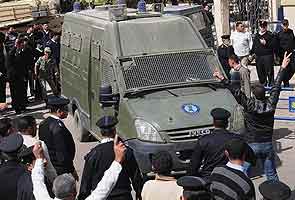 Cairo: Egyptian authorities said on Tuesday they had arrested the supreme guide of the Muslim Brotherhood, as they stepped up a campaign to crush the party of ousted president Mohamed Morsi.

The arrest stoked fears of an escalation in the already tense situation in Egypt, where nearly 900 people have died in days of clashes nationwide between security forces and Islamist supporters of Morsi.

The interior ministry said police picked up Brotherhood chief Mohamed Badie, 70, near Rabaa al-Adawiya square, where more than 200 Morsi supporters were killed on Wednesday as police cleared their protest camp.

Senior members of the Muslim Brotherhood organisation, including Badie, have been accused by Egypt's military-backed authorities of inciting the violence that the deaths of protesters. And judicial sources said fresh accusations had been levelled against Morsi himself, who has been held in a secret location since the military deposed him on July 3.

Meanwhile, former president Hosni Mubarak won conditional release in the third of four cases against him, but remained in detention on the fourth.

The bloodbath sparked by the crisis showed little sign of abating as militants fired rocket-propelled grenades at two buses carrying police in Sinai on Monday -- the deadliest attack of its kind in decades.

The interior ministry blamed the attack on "armed terrorist groups" and officials later said the border with the Palestinian Gaza strip, near where the attack occurred, would be closed.

Security sources said another policeman was killed in the northern city of El-Arish, bringing to at least 75 the number of security force members killed in Sinai since the army toppled Morsi.

The attack followed the death of 37 Muslim Brotherhood detainees as they were being transferred to a north Cairo jail.

Authorities said they died after police fired tear gas in a bid to free an officer taken hostage by prisoners.

But the Brotherhood, the once-banned movement from which Morsi hailed, held the police accountable, accusing them of "murder".

They said the incident affirmed "the intentional violence aimed at opponents of the coup, and the cold-blooded killing of which they are targets".

United Nations chief Ban Ki-moon said he was "deeply disturbed" by the deaths and called for a "full investigation to ascertain the facts surrounding this incident."

The fresh wave of unrest came hours after military chief Abdel Fattah al-Sisi pledged a "forceful" response by security forces to any violence from protesters.

"We will never be silent in the face of the destruction of the country," said Sisi, who overthrew Morsi after mass protests against the Islamist's single year of turbulent rule. And Egypt's foreign minister Nabil Fahmy said Monday in Sudan that his country was on the "right path."

The international community has fiercely condemned the violence, with rights group Amnesty International decrying it as "utter carnage". And Human Rights Watch called on Egypt's rulers to "urgently reverse" instructions for police to use live ammunition against protesters.

In response to the violence, EU ambassadors were recalled from their summer break for a meeting in Brussels, with foreign ministers due to review the bloc's ties with Egypt at an emergency meeting on Wednesday.

The European Union has pledged nearly five billion euros ($6.7 billion) in aid to Egypt but has cautioned this was under "constant review" after Morsi's ouster.

The United States has cancelled joint military exercises with Egypt but stopped short of suspending $1.3 billion in annual aid.

The international response has not been uniformly critical, however. Both Saudi Arabia and Jordan have said they back Egypt in its fight against "terrorism".

In Israel, meanwhile, an official urged the West to support Egypt's military.

Promoted
Listen to the latest songs, only on JioSaavn.com
"The name of the game right now is not democracy," he told the Jerusalem Post.

"The name of the game is that there needs to be a functioning state. After you put Egypt back on track, then (you can) talk about restarting the democratic process there."