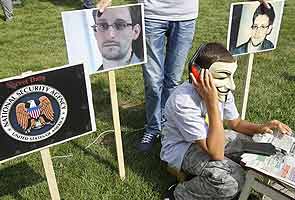 Berlin: Former NSA contractor Edward Snowden, who exposed the most extensive US global surveillance operations, has been awarded this year's German 'Whistleblower Prize' worth USD 3,900 in absentia.

The biennial award was given to Snowden, 31, at a ceremony in Berlin yesterday in recognition of his "bold efforts to expose the massive and unsuspecting monitoring and storage of communication data, which cannot be accepted in democratic societies," organisers of the prize said.

In a message from his asylum in Russia, Snowden warned against the dangers of a surveillance state.

"We should never forget the lessons of history when surveillance took the upper hand," he said in a statement read out at the meeting.

He also reminded governments that they must be accountable to their citizens for their actions.

Guardian journalist Glenn Greenwald, who has written a series of reports about surveillance operations by US and British intelligence services based on top secret NSA documents passed on to him by Snowden, praised him for taking "great personal risks" to expose the "unbelievably high level of lapses" by the United States.

He has shown "how a single person can change the world", Greenwald said.

Snowden, who faces espionage charges in the US, has fled his home in Hawaii to Hong Kong in May and subsequently to Moscow, where he has been staying since June 22.

He was granted a temporary asylum by the Russian authorities at the beginning of August.

Promoted
Listen to the latest songs, only on JioSaavn.com
The whistleblower prize was instituted in 1999 by the Association of German Scientists and the German chapter of the International Association of Lawyers Against Nuclear Arms (IALANA).

The German section of global anti-corruption organisation Transparency International joined the prize for the first time this year.