They Were Rescued From War. Now South Sudan's Child Soldiers Are Going Back.

The United Nations's hopes of ending the global problem of underage fighters are fading. 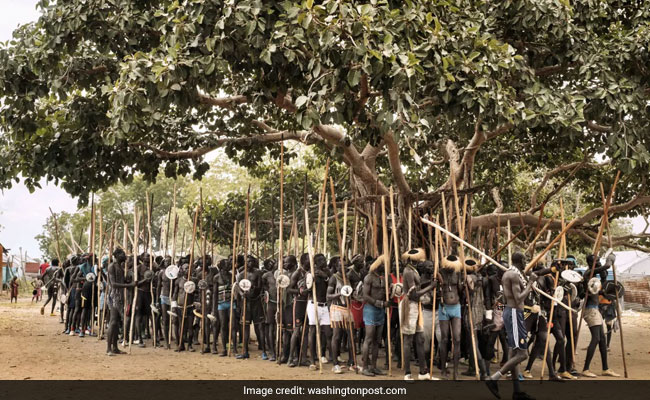 PIBOR, South Sudan: Outside, the young men with guns were playing dominoes and drinking tea. Babacho Mama could hear them through the sheet-metal walls of his room.

They had once been members of the same militia, a brigade of children with AK-47s. Now, Mama stood alone, sweating through his white T-shirt, a boy plucked from one of the world's most brutal wars but not so sure he'd been saved.

"Maybe I need to go back," he said. "It's better to die in combat than in hunger."

He was 16 now. Or 17 or 18 or 19. He had spent much of his childhood lugging a rifle, and his age had become an approximation, less relevant than his ability to fight.

In 2015, during a lull in South Sudan's civil war, Mama and 1,774 other boys promised the United Nations that their lives as combatants had ended. They handed over their baggy military fatigues in choreographed ceremonies that amounted to one of the largest releases of child soldiers in recent history.

"I'm done with fighting," Mama told a social worker after the release.

"Back to learning," aid groups painted on a new primary school in Pibor.

Two years later, the boys are returning to the battlefield. Development programs to help them have failed. The school barely functions. 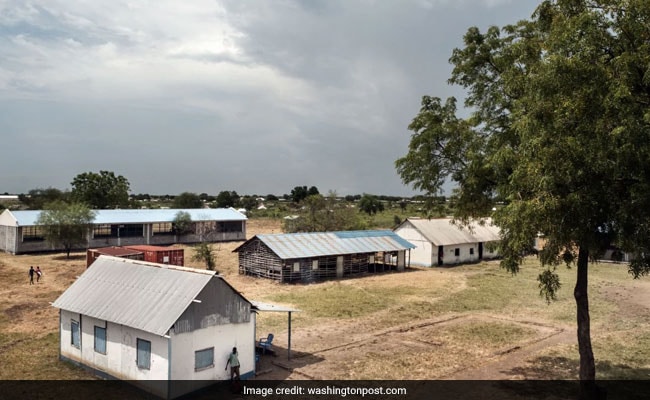 This was supposed to be the decade when the world ended the use of child soldiers. In 2000, the U.N. General Assembly adopted a protocol to prevent countries from recruiting children as fighters. In 2014, the United Nations launched a global campaign to remove children from the battlefield within two years.

There have been some successes. The United Nations says 115,000 child combatants have been released globally since 2000. But in war-torn countries such as Iraq and Yemen, the numbers are climbing. They are rising, too, in South Sudan, where the challenge is not just disarming children but keeping them disarmed.

In Pibor, the former boy fighters have joined a constellation of groups - the military, rebel groups, ethnic militias and others - in a conflict that has devolved into one of the world's gravest humanitarian crises. On a spreadsheet, aid workers in Pibor write next to their names: "re-recruited."

Now it was Mama's turn to decide. He had become one of Pibor's most serious students, carrying a worn English textbook with him almost everywhere. After years of wearing a stained, mismatched military uniform, he ironed his one pair of khaki pants and striped oxford shirt every day. School offered the slender hope of a job, a different future.

But Mama was now eating only one full meal of dried goat meat and peppers every two days. Other boys were so hungry, aid workers said, that they had collapsed in their classrooms. The war had destroyed farmland and blocked commerce; even the United Nations had stopped distributing food aid.

"In the barracks, at least we can eat," one of Mama's soldier friends taunted him.

Back in his sheet-metal shack, he weighed his options.

"What else am I supposed to do?" Mama asked.

Mama said he was 11 or 12 when he fired his AK-47 at a man for the first time. The gun jolted back against his bony shoulder, coughing a plume of smoke, and his commander pronounced him a warrior.
Like hundreds of other boys, he had joined a Pibor militia, called the Cobra Faction, by simply showing up and asking for a gun. But the choice wasn't much of a choice at all.

Mama's parents had been killed by a rival ethnic group, in a massacre that left dozens dead. His father was shot in the chest. His mother's throat was slit.

Mama had no relatives to protect him. He had never attended school. The boys of Pibor were expected to avenge the incursion. So, within weeks, he had memorized the Cobra Faction's fight songs and learned to aim his rifle, working mostly as a bodyguard for the group's leader, David Yau Yau.

"I have my rocket-propelled grenade, and I'm ready to fight," he sang.

Now, the whole experience - roughly four years of guerrilla warfare - comes back to him in a few discrete, horrific memories. There's the first time he saw the dead body of one of his comrades, and the smell that made him gag. There's the time when, after days of nonstop fighting, he collapsed into convulsions.

His new life? He polishes his fake-leather sandals each morning, even though they are covered in mud by the afternoon. In a town where hundreds of young men carry rifles, he bears a nail clipper on a keychain, jangling as he walks to school.

Twice in the past six months he has been caught in the crossfire of a clash at Pibor's dilapidated market, ducking behind the stalls, helpless.

"If I had a gun, at least I could have replied to where the bullets were coming from," he said.

South Sudan's war is composed of many wars. There's South Sudan's civil war, which started with a rift between politicians in 2013. There's the ancient fight between Pibor's Murle ethnic group and its neighbors. And there's the conflict within Pibor itself, groups of young men fighting to establish their prominence.

All of those were raging one Saturday last month as Mama sat in a classroom at the Pibor Boys Primary School. He copied sentences from the board for an English lesson:

"I go to school every day."

"I was in school yesterday."

And then he squinted out the window at the military headquarters about 100 yards away, a smattering of tin and cinder-block shacks, guarded by skinny men in camouflage.

The aid workers who periodically helicoptered into Pibor, and into Mama's life, had spent years demobilizing boy soldiers across Africa.

In Liberia, Mozambique, Uganda and Rwanda they had disarmed tens of thousands of children and reunited them with their families. It was a task that had grown increasingly urgent in recent decades as the number of underage fighters surged, in part because of the proliferation of lighter-weight rifles that even a child could handle.

In each country, the process was more or less the same. The boys handed over their weapons, schools were opened, vocational programs were launched, social workers arrived. Eventually, armed children were transformed into unarmed civilian young men.

But South Sudan posed a different kind of challenge. The war here had never ended. Boys put down their guns after a cease-fire and then picked them up when the fighting resumed. There were few alternatives. About 72 percent of children in South Sudan do not finish primary school, according to UNICEF, a higher proportion than anywhere else in the world. In Pibor it's 98 percent.

Here, the kinds of aid projects that helped child soldiers in other countries were almost all disrupted by violence.

UNICEF built a bakery for the boys to manage in Pibor, but its flour supply was cut off when the roads were blocked by clashes. The agency started a masonry class, but fighters intercepted its brickmaking materials. Aid workers provided goats for the boys, but dozens of them, including Mama's, were stolen by rival ethnic groups.

This past March, while they were driving into Pibor, six aid workers building a youth center were killed by unidentified armed men.

"There is no harder place than South Sudan to demobilize children," said Vedasto Nsanzugwanko, who is the country head of child protection for UNICEF and has also worked in Rwanda, Uganda and Sri Lanka.

The roots of the problem run deep in South Sudan, which split from Sudan in 2011 after a north-south war that lasted more than two decades. Thousands of underage fighters were released by armed groups after that conflict. But once the civil war in South Sudan ignited in 2013, about 15,000 children were recruited, according to UNICEF. The optimism surrounding the Pibor demobilization in 2015 quickly faded as a cease-fire collapsed; today there are an estimated 18,000 child combatants nationwide.

In Pibor, it's easy to see how the once-promising demobilization program is collapsing.

There is the shrinking school enrollment and the number of children who suddenly disappeared from class earlier this year to fight an incursion by a rival ethnic group. In one classroom of 20 children, 13 said they participated in the clashes.

Then there is the hospital, where one day last month, two of Mama's former comrades were lying next to each other, recovering from gunshot wounds.

"They demobilized us, but they gave us no compensation," said one of the men, Anyang Nyielo, 23, who was fighting for anti-government forces when he was shot recently in the shoulder. "There was nothing else for me to do. I got upset and went to the opposition. They gave me a gun and said, 'You are with us.' "

On a Monday afternoon, Mama put on his oxford shirt and khaki pants and walked along the dirt road that led to Pibor Boys Primary School, a lean ex-bush fighter now in the fourth grade.

From the 1990s until recently, the Sudanese government had airdropped weapons to Pibor's rebels as a way of destabilizing its rivals who controlled much of the southern part of the country. By the time South Sudan declared independence in 2011, it was a giant arms bazaar.

Now, the violence often felt all-consuming. As Mama walked closer to school, he passed a civilian defense force of about 100 bare-chested men with beaded belts and wooden rods, chanting and blowing whistles, threatening a reprisal against another group. Some of them, Mama noticed, had been fellow members of the Cobra Faction.

Mama shook his head and continued walking, a UNICEF folder under his arm.

Once he reached the classroom, he sat on a bench. His teacher, a short man named Adam, arrived 45 minutes late.

"Go bring chalk," Adam said to Mama. And then the teacher launched into a fast-paced explanation of the past tense in English, which is South Sudan's official language but spoken by few people in Pibor.
Mama took notes. He leaned forward, elbows on the desk, to get a better view.

Then Adam called on him.

The boys behind him laughed.

"You're older than that," one said in Murle, the local language.
But Mama was done trying to guess. He wrote the sentence in his notebook and stared straight ahead at the chalkboard.

The whole school day lasted a half-hour. The teacher hadn't been paid in months, because the government was bankrupt, so lessons were short.

When Mama left the classroom, the sun was high in the sky. Nearby, the men were still screaming and marching with their wooden rods.

"Even our great-grandparents fought like this," Mama said angrily, and he started walking back toward his metal shack.

Inside, there was nothing to eat and nowhere to sleep except on the dirt. But on the shelf there were two shoulder patches he had earned as a boy on the front lines, bearing the acronym of the country's armed forces, the Sudanese People's Liberation Army, which had briefly absorbed the militia.

Promoted
Listen to the latest songs, only on JioSaavn.com
Each had one gold star in the center. He had been a lieutenant. He had never been sure why he kept them. Now he was glad they were there.

(This story has not been edited by NDTV staff and is auto-generated from a syndicated feed.)
Comments
South Sudan Childrenchild soldiersUNICEF