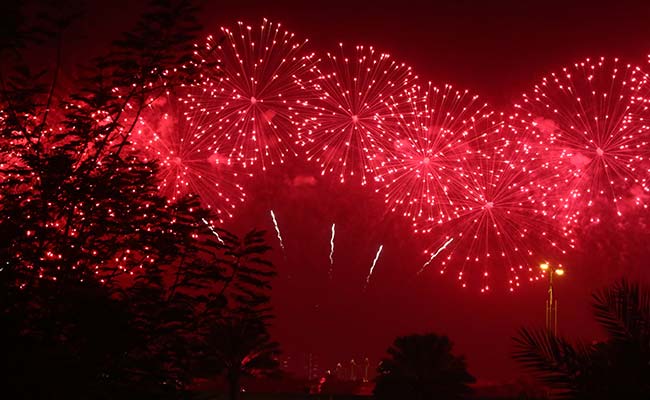 Fireworks burst over the Atlantis Hotel at the man-made Palm Island in Dubai, on January 1, 2016. (AFP Photo)

Dubai, United Arab Emirates: A spectacular fireworks display lit up the sky above Dubai Thursday, centred on the iconic Burj Khalifa tower close to where a huge fire in a luxury hotel injured 16 people hours earlier.

The display was most elaborate at the 828-metre (2,700-foot) Burj, where blasts of colour and light exploded as the clock struck midnight.

Lasers flashed through the skies over the chic district surrounding the tower, close to where flames were still billowing from the 63-storey Address Downtown hotel.

Burj Khalifa was lit up with the flags of the six Gulf Cooperation Council states, of which the United Arab Emirates is a member, witnesses said.

Other fireworks were seen at the sail-shaped landmark Burj al-Arab hotel, in addition to various spots across the city as spectators cheered on.