Dozens Stranded In Tunnel Beneath English Channel After Train Breaks Down

Dozens of people were left stranded for hours in the tunnel beneath the English Channel after a train from Calais to Folkestone broke down on Tuesday. 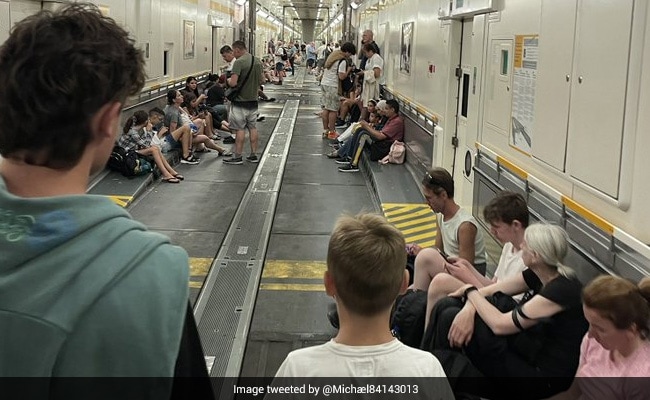 The Shuttle was brought to a controlled stop and inspected.

Dozens of people were left stranded for hours in the tunnel beneath the English Channel after a train from Calais to Folkestone in United Kingdom broke down on Tuesday, according to the BBC. Images circulating on social media showed Eurotunnel Le Shuttle passengers being evacuated through an emergency service tunnel. They were finally moved to a different train and sent to Kent's Folkestone terminal, the outlet further said.

A user named Sara Rodes Hughes shared a post on Twitter and wrote, "I've been told there have been 3 incidences: train stuck, someone falling ill and having to wait for an ambulance and a car broken down. Waiting times keep changing, been stuck for almost 4h with 2 little ones and it's shocking how no real info is provided! Compensation now!"

Another user named Michael Harrison shared a picture of the passengers being evacuated and wrote, "I was on the broken-down train. Now sitting on a cargo train that has trouble gaining traction."

I was on the broken down train. Now sitting on a cargo train that has trouble gaining traction. pic.twitter.com/qa0AYPsulh

The official Twitter handle of Eurotunnel Le Shuttle shared a post on Tuesday and wrote, "Due to a technical issue, our service is running with a delay. Waiting times may be longer than normal. Rest assured; we will get you away as soon as we can." They also shared a link for the further updates.

According to Le Shuttle, the problem began when the train's alarms went off, and there was a need to examine it, reported BBC.

A Eurotunnel spokesperson said that the services were now back to normal.

"The Shuttle was brought to a controlled stop and inspected. As a precautionary measure, for their safety and comfort, we transferred the passengers on-board to another shuttle, via the service tunnel (which is there for exactly that purpose)," the spokesman added.

"We brought them to the passenger terminal building, where food and drinks were available, and then slowly brought out the original shuttle and reunited them with their vehicles."