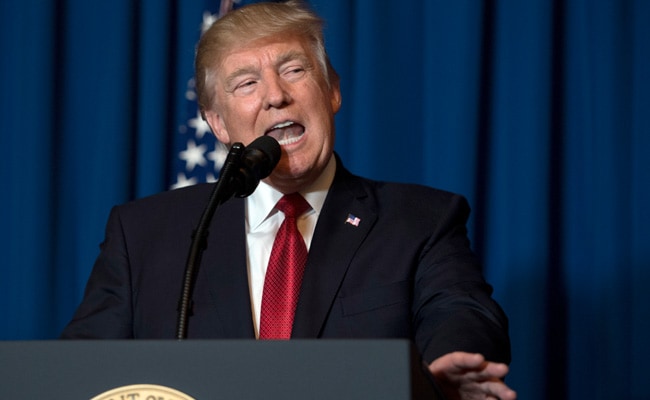 On Twitter, the reaction from the Trump Internet was fractured and furious (AFP Photo)

For hours, the Trump Internet warned that their president was being tricked. Mike Cernovich and Alex Jones's Infowars - both have earned praise from President Trump or those close to him in the recent past - promoted a conspiracy theory all day Thursday that blamed the U.S. deep state for the gas attack in Syria, and not the Assad regime. Infowars called the attack a "false flag" meant to force the United States into a war.

Under the hashtag #SyriaHoax, a part of Twitter that usually musters its powers to promote Trump's agenda started to urge Trump to stay out of Syria.

One account tweeted, "We don't want war in Syria!! Don't believe the #SyriaHoax, we need to focus on our own country right now. America First."

"I voted for you, my whole family voted for you," said Angelo John Gage, a Marine veteran who was once the chairman of the white nationalist National Youth Front. "We all busted our a--es to destroy the fake media news, and now you're falling for it." His video reaction to rumors of U.S. military action in Syria was a direct address to Trump, and it went viral. Both WikiLeaks and Infowars reposted it.

Cernovich, meanwhile, livestreamed himself talking about Syria for about 11 hours total on Thursday. Days ago, Cernovich was getting praise from Trump's son, who suggested he should win a Pulitzer. He spent Thursday rallying his followers to try to change Trump's mind about intervention in Syria.

Cernovich was adamant that Trump might actually listen to him and his readers for a decent reason: There's plenty of evidence that Trump reads and values conspiracy-theory sites like Infowars, and Cernovich himself appears to have some readers in the Trump administration. On Sunday, Cernovich was the first to report a story about Obama national security adviser Susan E. Rice requesting the "unmasking" of anonymous Americans named in foreign intelligence reports, implying that he now has sources with access to that information. And on Thursday afternoon, Cernovich said one of his sources told him U.S. airstrikes were possible in Syria that evening, which turned out to be right (although rumors of a possibly military action were circulating around Washington much of the day).

Several hours into his livestream, however, news broke that Trump hadn't listened to them. "I don't know if this is true or not. This is not my journalism," he said, reading the news on his iPad while broadcasting live. "I certainly don't want this to be true." As it became clear to him that it was true, Cernovich said: "This is appalling really. This is unbelievable. This is not what we voted for. This is definitely not what we voted for."

Cernovich resumed taking listeners' calls. One of the first after the strikes was particularly stark: "Is the world over? Are we all gonna die now?" the caller asked. Cernovich said it wasn't. The caller responded, "I"m literally scared sh---less now. I might have to kill myself. Okay, peace out."

Another caller said that "Trump's contract with the people was essentially void."

On Twitter, the reaction from the Trump Internet was fractured and furious. Paul Joseph Watson, a Youtuber who writes for Infowars, had one of the most dramatic.

He tweeted a series of tweets that stated:

"I guess Trump wasn't "Putin's puppet" after all, he was just another deep state/Neo-Con puppet."

"It's been fun lads, but the fun is over. I'll be focusing my efforts on Le Pen, who tried to warn Trump against this disaster."

"Guys, I can't vehemently oppose destabilizing the Syrian government for 6 years and then support it just because Trump did it. Sorry."

Others began to participate in a meme that's usually found only among Trump's opponents: digging up the president's old tweets on a given topic to point out his hypocrisy. Several people shared a photo of a Trump tweet from 2013 in which he wrote, "What I am saying is stay out of Syria."

4chan's /pol/ board was a mess overnight, with posts trying to rationalize the missile strike, criticizing Trump and blaming Trump's daughter Ivanka for the decision to take military action on Thursday. Others proclaimed their loyalty to Trump and dismissed his critics on the board as "shills."

Other Trump Internet personalities were trying to send a different message. Bill Mitchell, for instance, fired off a ton of tweets urging supporters to calm down:

The same was true on r/The_Donald, an enormous Reddit board best known for spamming Reddit with pro-Trump memes. On Friday morning, one of the top posts there was titled "I'm Done with Trump." Click through, though, and the punchline is obvious. The body of the post says: ". . . 's book 'The Art of the Deal'. What a fantastic read. Did I miss something?" It's worth noting, though, that r/The_Donald also has a very strict rule against "disrespecting" Trump in any posts there.

Promoted
Listen to the latest songs, only on JioSaavn.com
Still, it's hard to say right now how many of Trump's now-furious supporters will jump off the Trump train for good because of this. Some even found a silver lining in the idea that maybe this would give the impression that the Trump Internet isn't completely a propaganda machine for whatever the president does. Cernovich ended Thursday night with the conclusion that "Trump's better nature got the best of him" in authorizing an attack because he has a "soft spot" for children.