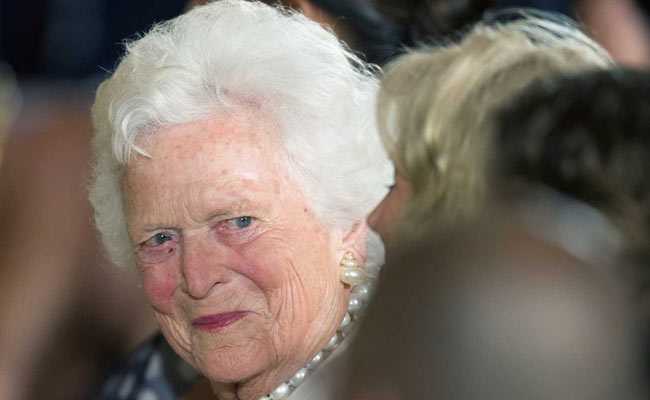 Author Susan Page, the Washington bureau chief of USA Today, detailed Bush's thoughts on Trump and the Republican Party in her coming book, "The Matriarch: Barbara Bush and the Making of an American Dynasty." Page, who used interviews and notes from Bush's journals in writing the biography, wrote about it Wednesday in USA Today.

According to excerpts from the book, Bush, who died in April at age 92, blamed Trump for her "heart attack" in 2016.

"It wasn't technically a heart attack, though she called it that. It was a crisis in her long battle with congestive heart failure and chronic pulmonary disease that hit her like a sledgehammer one day in June 2016," Page wrote in USA Today. But she added: "The tumultuous presidential campaign in general and Trump's ridicule of son Jeb Bush in particular had riled her. 'Angst,' she told me."

"For decades, Barbara was a titan in American life," he said. "Her presence and character were engraved into America's identity. Her strength and toughness really embodied the spirit of our country, and her warmth and devotion earned the admiration of an entire nation and indeed, the entire world. She was a tireless champion for literacy, she was a fierce advocate for the American family and she was a woman of proud patriotism and profound faith."

Trump did not attend the funeral.

Bush had expressed disdain for Trump more than 20 years ago, writing in her journals in the 1990s that he was "greedy, selfish and ugly," according to a news release about the book. Page wrote that more recently, Bush had suggested Trump's recent rise to power had turned the Republican Party into one she could no longer relate to and that she did not understand how others could support him.

"How did she think things were going in the USA in the Age of Trump?

"'I'm trying not to think about it,' she said in an interview as the first anniversary of Trump's election approached. "We're a strong country, and I think it will all work out." Even so, she was dismayed by the nation's divisions and by the direction of the party she had worked for, and for so long.

"Did she still consider herself a Republican?

"In an interview with me in October 2017, she answered that question (with a) yes. When I asked her again four months later, in February 2018, she said, 'I'd probably say no today.'"

Bush was so concerned about Trump that after first expressing hesitancy about her son, Jeb, running for president, she ultimately gave in - and even campaigned for him, according to Page.

The author noted Bush had written in her journal that she could not get behind Trump.

"'I don't understand why people are for him,' she said in one interview. In another, she expressed astonishment that women could support him. George (H.W.) Bush ended up voting for Hillary Clinton, the first time in his life that he had cast a ballot for a Democrat for president. Barbara Bush wrote in Jeb's name on the last day of early voting. 'I could not vote for Trump or Clinton,' she wrote in her diary."

Bush had said when she woke up on Nov. 9, 2016 - the day after the presidential election - she discovered "to my horror" Trump was the 45th president of the United States.

"She didn't hide her horror from those close to her. After Trump was elected, a friend in Kennebunkport gave her a Trump countdown clock as a joke. The red, white, and blue digital clock displayed how many days, hours, minutes and seconds remained in Trump's term. She parked it on the side table in her bedroom, next to the chair she would sit in to needlepoint or watch television.

"She liked the countdown clock so much that when the Bushes returned to Houston that October, she brought it with her. It sat on her bedside table, where she could see it every day. It was there to the day she died."

Regarding Trump, Bush had said Jeb told her not to worry about things she could not control.

"He's right," the former first lady said, according to Page. "Just do good, make life better for someone else."

(Except for the headline, this story has not been edited by NDTV staff and is published from a syndicated feed.)
Comments
Barbara BushDonald Trump