With North Korea In Spotlight, Donald Trump To Visit Asia In November

A US official said Asian leaders who met Trump at the United Nations General Assembly in New York last week helped persuade him to attend in unity with key Asian allies. 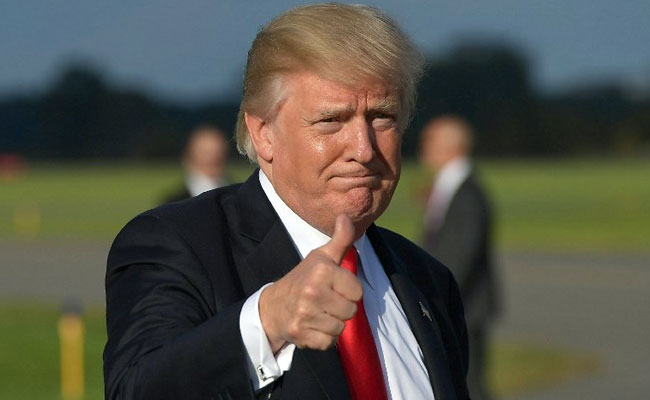 Joined by his wife Melania, Donald Trump will travel to Asia from November 3-14 (AFP)

Washington: Donald Trump will travel to Asia in November for the first time since becoming president, stopping in Japan, South Korea, China, Vietnam and the Philippines on a trip expected to be dominated by the North Korea nuclear threat.

Joined by his wife Melania, Trump will travel November 3-14. His visit will include attending two major summits, the Asia-Pacific Economic Cooperation forum in Vietnam and the Association of Southeast Asian Nations conclave in the Philippines.

Trump's attendance at the Manila summit had been in doubt until recently, with officials saying he was reluctant to show support for Philippine President Rodrigo Duterte, who has been responsible for a number of anti-American outbursts.

A US official said Asian leaders who met Trump at the United Nations General Assembly in New York last week helped persuade him to attend in unity with key Asian allies.

An Asian diplomat welcomed Trump's decision to visit Manila "because that reassures the region that Asia policy is not just about North Korea, it's about Southeast Asia as well."

The diplomat said Trump's decision to withdraw from the Trans Pacific Partnership trade deal early this year had raised questions about the administration's commitment to the region. But visits by senior officials, including the secretaries of state, defense and commerce, and Trump's planned trip, showed Washington intended to remain engaged.

Philippine Foreign Secretary Alan Peter Cayetano said Duterte was looking forward to meeting Trump, adding that the relationship between the two countries was so resilient that ties would always recover, regardless of disagreements.

Trump, who has been locked in an increasingly bitter war of words with North Korean leader Kim Jong Un, will have the opportunity to bolster allied resolve for what he calls the "complete denuclearization" of Pyongyang.

He has denounced Kim as a "rocket man" on a suicide mission for test launches of ballistic missiles and for nuclear weapon tests. He has warned North Korea would face total devastation if it threatens the United States. Kim has blasted Trump as "mentally deranged."

"The president's engagements will strengthen the international resolve to confront the North Korean threat and ensure the complete, verifiable, and irreversible denuclearization of the Korean Peninsula," the White House said in announcing the trip.

Trump's visit to China will reciprocate a trip to the United States made in April by Chinese President Xi Jinping. Trump has applied heavy pressure on China to rein in North Korea. While his efforts have had limited success thus far, he went out of his way to thank Xi on Tuesday for his efforts.

"I applaud China for breaking off all banking relationships with North Korea - something that people would have thought unthinkable even two months ago. I want to thank President Xi," Trump said at a news conference with Spanish Prime Minister Mariano Rajoy.

Yang described Trump's visit as of great importance to the bilateral relationship. "Let us concentrate on cooperation and properly manage our differences in a spirit of mutual respect and mutual benefit," he said to Tillerson.

At the same time, Trump's national security team is conducting a broad review of US strategy toward China in search of ways to counter Chinese trade practices and open up market access, a senior administration official said.

The United States also considers Chinese entities behind the theft of intellectual property and cyber attacks and wants to find ways to address these concerns, the official said.

Promoted
Listen to the latest songs, only on JioSaavn.com
There was no definite timetable for concluding the review.