Following the June 12 Donald Trump-Kim Jong Un summit in which Kim made a broad agreement to "work toward denuclearization" of the Korean Peninsula, Donald Trump went on to say that North Korea was no longer a nuclear threat 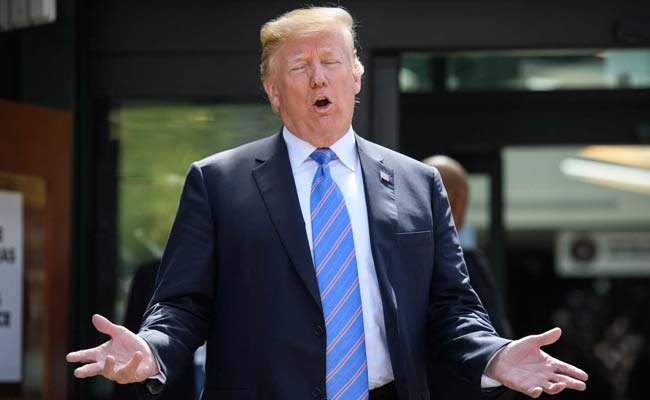 President Donald Trump suggested on Monday that China might be seeking to derail US efforts aimed at denuclearizing North Korea, but said he was confident that North Korean leader Kim Jong Un would uphold a pact the two agreed on last month.

In his first remarks about challenging diplomatic talks held at the weekend that sowed fresh doubts over North Korea's willingness to give up its nuclear arsenal, Trump said China "may be exerting negative pressure" in reaction to punitive US tariffs on Chinese goods.

US Secretary of State Mike Pompeo reported progress from the first high-level talks since Trump and Kim met in Singapore, although he said a hard road lies ahead - North Korea accused him of "gangster-like" diplomacy after he left Pyongyang.

Following the June 12 Trump-Kim summit in which Kim made a broad agreement to "work toward denuclearization" of the Korean Peninsula, Trump went on to say that North Korea was no longer a nuclear threat, even though no details were announced.

Pompeo went to Pyongyang aiming to "fill in" details of the agreement. On Monday, he said there were "many hours" of negotiations left.

"Now is the time for all of us, the State Department and others to deliver, to implement the agreement between President Trump and Chairman Kim," Pompeo told NATO troops at the end of a visit to Afghanistan.

"To think this would happen in the course of a handful of hours would have been ludicrous," Pompeo said.

The post-summit statements did not say how or when the reclusive state would dismantle its nuclear missile program that is believed to be capable of hitting the United States.

Leaked US intelligence findings have concluded that North Korea does not intend to give up its nuclear program completely.

A Twitter post by Trump in which he suggested that China might be spoiling North Korea talks was another twist in his rollercoaster approach to Beijing, a mix of praise and criticism, diplomatic outreach and outright aggression.

"I have confidence that Kim Jong Un will honour the contract we signed &, even more importantly, our handshake. We agreed to the denuclearisation of North Korea," Trump said. "China, on the other hand, may be exerting negative pressure on a deal because of our posture on Chinese Trade-Hope Not!"

The administration worked for months to win China's support for its "maximum pressure" campaign of sanctions to isolate North Korea, which does most of its international trade with the Chinese.

While trying to keep the Chinese on board for North Korea negotiations, Trump took a tough stance on trade with China, slapping tariffs last week on $34 billion in Chinese exports to the United States, prompting retaliation in kind from Beijing.

Pompeo has been criticized by some US media and some Washington foreign policy observers for the lack of results and acrimony from Pyongyang, but two former US officials who have negotiated with North Korea cast his talks in a more positive light.

"Pompeo's visit I think was a useful beginning to set out parameters and to start working on the details of a deal," said Joel Wit, founder of the 38 North research institute. "The North Koreans talked about a vague, step-by-step simultaneous approach, which seems to me the right way to move forward. That's the only thing that's going to work."

Retired Ambassador Robert Gallucci also called, however, for the appointment of a senior special negotiator. He said Trump should not have asserted that North Korea was no longer a nuclear threat, a claim that is "really flat-out misleading."

"It leads to expectations that anybody who is serious and watching this process would say you shouldn't have those expectations," Gallucci said.

(Except for the headline, this story has not been edited by NDTV staff and is published from a syndicated feed.)
Comments
Donald TrumpKim Jong UnDonald Trump-Kim Jong Un Summit