The House could move quickly on impeachment, even going without hearings, but the Senate is in recess and could not begin to hold a trial before Jan. 19 at the earliest.

"Next, we will proceed with bringing impeachment legislation to the floor," Nancy Pelosi said.

The House will take up a resolution to impeach President Donald Trump for the second time in less than two years unless Vice President Mike Pence and the cabinet invoke the 25th Amendment this week to remove him from office, Speaker Nancy Pelosi said.

"In protecting our Constitution and our Democracy, we will act with urgency, because this President represents an imminent threat to both," Pelosi said in a letter Sunday to House Democrats. "As the days go by, the horror of the ongoing assault on our democracy perpetrated by this President is intensified and so is the immediate need for action."

Pelosi said Democratic leaders on Monday will request unanimous consent in the House for a resolution urging Vice President Mike Pence to convene the cabinet to invoke the 25th Amendment to the Constitution "to declare the President incapable of executing the duties of his office."

If any Republicans or Democrats object, that resolution will go to the floor for a roll call vote on Tuesday. After its expected passage, Pence will be given 24 hours. However Pence has privately dismissed using the 25th Amendment as not feasible, according to a person familiar with the matter.

"Next, we will proceed with bringing impeachment legislation to the floor," Pelosi said.

Pelosi and other members of her leadership team plan a conference call with House Democrats on Monday afternoon to discuss the path ahead. A vote on impeachment could be held as soon as Wednesday, though the House could delay sending any articles of impeachment to the Senate to allow that chamber to take up President-elect Joe Biden's cabinet nominees and top legislative priorities. By that point, Democrats would have control of the Senate as well.

More than 200 House Democrats have signed on to co-sponsor an impeachment resolution that accuses Trump of "Incitement of Insurrection," and says he engaged in high crimes and misdemeanors by "willfully inciting violence against the government of the United States" in connection with the storming of the Capitol on Wednesday by throngs of his supporters.

The House could move quickly on impeachment, even going without hearings, but the Senate is in recess and could not begin to hold a trial before Jan. 19 at the earliest. Senate Majority Leader Mitch McConnell's office had no immediate comment on the latest moves in the Democratic-controlled House. 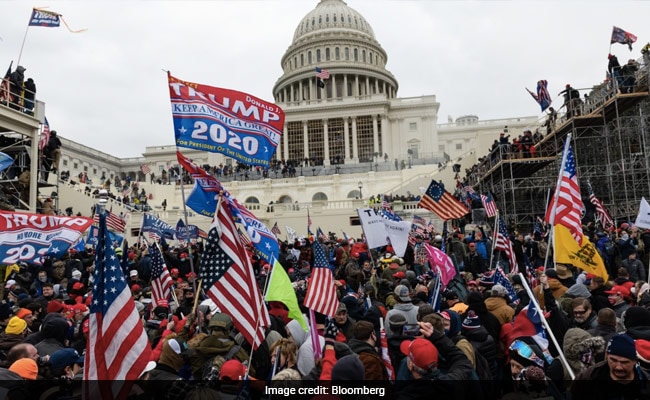 Demonstrators attempt to enter the US Capitol building during a protest January 6.

One issue Democrats will have to weigh in determining the course ahead: Biden's agenda. Once a trial is underway, the Senate could not take up other business, including Biden's cabinet nominees and any top priority legislation such as boosting stimulus payments for most Americans.

Representative James Clyburn, a member of the House Democratic leadership, said Sunday that the House could hold on to the articles of impeachment for as much as 100 days.

"I do have concerns, and so does Speaker Pelosi" about the impact on Biden's administration, Clyburn said on CNN's "State of the Union" program. "Let's give president-elect Biden the 100 days he needs to get his agenda off and running. And maybe we will send the articles some time after that."

Officials with Biden's transition declined to comment on Pelosi's letter. Biden has treaded carefully, saying on Friday that impeachment is a matter for Congress to decide. But he also his inauguration would be the quickest way to get Trump out of office.