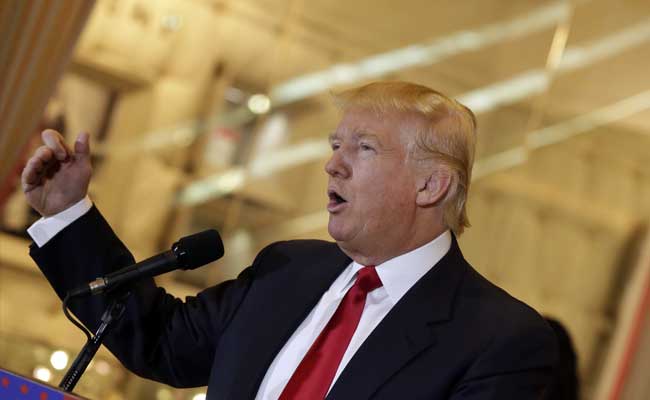 His partner was the son of a government minister suspected by U.S. diplomats of laundering money for Iran's military and described as "notoriously corrupt."

Eighteen months later, and only weeks after daughter Ivanka Trump released a publicity video of the nearly finished project, references to the Baku project have disappeared from Trump's website.

Trump's general counsel, Alan Garten, told The Associated Press that it was on hold for economic reasons.

Trump often talks of hiring the best people and surrounding himself with people he can trust.

In practice, however, he and his executives have at times appeared to overlook details about the background of people he has chosen as business partners, such as whether they had dubious associations, had been convicted of crimes, faced extradition or inflated their resumes.

The Trump camp's screening skills are important as the presumptive Republican presidential nominee turns to selecting a running mate. They would only become more crucial if he won the White House.

Then, Trump have to name more than 3,600 political appointees to senior government positions, including critical jobs overseeing national security and the economy.

In the Azerbaijani case, Garten said the Trump Organization had performed meticulous due diligence on the company's partners, but hadn't researched the allegations against the Baku partner's father because he wasn't a party to the deal.

"I've never heard that before," Garten said, when first asked about allegations of Iranian money laundering by the partner's father, which appeared in U.S. diplomatic cables widely available since they were leaked in 2010.

Garten subsequently said he was confident the minister alleged to be laundering Iranian funds, Ziya Mammadov, had no involvement in his son's holding company, even though some of the son's major businesses regularly partnered with the transportation ministry and were founded while the son was in college overseas.

Ziya Mammadov did not respond to a telephone message the AP left with his ministry in Baku or to emails to the Azerbaijan Embassy in Washington.

Garten told the AP that Trump's company uses a third-party investigative firm, which he did not identify, that specializes in background intelligence gathering and searches global watch lists, warrant lists and sanctions lists maintained by the United Nations, Interpol and others.

Trump has described his background research as presidential in quality. Asked in a 2013 deposition why he had not performed formal records of due diligence on a business partner - a man Trump later deemed "a dud" - Trump said he considered word-of-mouth inquiries to be adequate.

"We heard good things about him from a couple of different people," he said of his partner in the deposition. "That's true with the president of the United States. You get references and sometimes it's good and sometimes it's not so good."

Trump's lawyer, Garten, who was in the room at the time of Trump's statement, told the AP that it was unreasonable to expect Trump to know the full range of the company's diligence efforts.

Any American contemplating a business venture in Azerbaijan faces a risk: "endemic public corruption," as the State Department puts it. Much of that money flows from the oil and gas industries, but the State Department also considers the country to be a waypoint for terrorist financiers, Iranian sanctions-busters and Afghan drug lords.

The environment is a risky one for any business venture seeking to avoid violating U.S. penalties imposed against Iran or anti-bribery laws under the U.S. Foreign Corrupt Practices Act.

Trump's choice of partners in Baku was Anar Mammadov, the son of the country's transportation minister. Anar Mammadov did not respond to AP's emails or messages sent to his social media accounts or messages left with his company.

Garten said the Trump Organization had performed background screening on all those involved in the deal and was confident Mammadov's father played no role in the project.

Experts on Azerbaijan were mystified that Trump or anyone else could reach that conclusion.

Anar Mammadov is widely viewed by diplomats and nongovernmental organizations as a transparent stand-in for the business interests of his father. Anar's business has boomed with regular help from his father's ministry, receiving exclusive government contracts, a near monopoly on Baku's taxi business and even a free fleet of autobuses.

"These are not business people acting on their own - you're dealing with daddy," said Richard Kauzlarich, a U.S. ambassador to Azerbaijan under President Bill Clinton in the 1990s who went on to work under the Director of National Intelligence during the George W. Bush administration.

"Whatever the Trump people thought they were doing, that wasn't reality," Kauzlarich said.

Anar Mammadov, who is believed to be 35, has said in a series of interviews that he founded Garant Holdings' predecessor - which has arms in transportation, construction, banking, telecommunications and manufacturing - in 2000, when he would have been 19.

Anar received his bachelor's degree in 2003 and a master's in business administration in 2005 - both from a university in London.

Mammadov's statement that he founded the business in 2000 appeared in a magazine produced by a research firm in partnership with the Azerbaijani government.

In other forums, he has said he started the business in 2005, though several of its key subsidiaries predate that period.

Garten declined to discuss specific background research on Anar but said such checks were "comprehensive." The file for the Baku project would not have included anything on Ziya Mammadov, Garten said, because the Trump Organization concluded that he would play no role in the project.

"The younger Mammadov did not build his business empire simply by delivering newspapers," said Matt Bryza, a former U.S. ambassador to Azerbaijan. He served on the National Security Council in George W.

Bush's administration and was appointed ambassador from 2010 to 2012 under President Barack Obama.

Ziya Mammadov was described in March 2009 in leaked U.S. diplomatic cables as "notoriously corrupt, even for Azerbaijan" and accused of working closely on government highway construction contracts awarded to a former senior Iranian military official in the Republican Guard, Kamal Darvishi.

"We assume Mammadov is a silent partner in these contracts," the State Department cable said.

Though the Baku hotel project has not been completed, it has earned Trump a significant payday. He earned between $2.5 million and $2.8 million in hotel management fees from a hotel that has never opened, according to the financial disclosures filed by his campaign.

Trump licensing details generally involve the receipt of a significant minority stake in the property, too.

The Azerbaijani case is not the only one involving partners with unusual pasts.

At least twice, Trump has been involved in development deals with convicted criminals. In 2001, Trump announced he was partnering with developer Leib Waldman to build a massive condo and hotel tower in Toronto.

Two months later, Canadian newspapers revealed that Waldman had fled the United States after pleading guilty to bankruptcy fraud in the mid-1990s.

His extradition sent the project into a tailspin. Another developer eventually stepped in: Alex Shnaider, a former Ukrainian metals trader who survived the often violent privatization of the post-Soviet steel industry in the 1990s.

"We heard fantastic things about (Shnaider)," Trump told Forbes in 2005. "But sometimes people say wonderful things whether they mean them or not."

Trump and Shnaider's development company are now in litigation. Trump alleges that Shnaider was an incompetent developer and bilking condo owners; Shnaider wants to remove Trump's name from the building.

In the early years of the last decade, Trump also struck an alliance with Bayrock Group LLC, an upstart property development firm that had recently moved into the Trump Tower.

As a partner, Bayrock didn't have much of a track record. The firm was created in July 2001. Its two top officials were Tevfik Arif, a former Soviet hospitality minister whose previous development experience had been in Turkey, and Felix Satter.

Digging into the background of Satter wouldn't have turned up much because Satter did not actually exist. But a man with a similarly spelled name, Felix Sater, had been sentenced to prison for stabbing a man in the face with a broken margarita glass and barred for life from selling securities.

A subsequent complaint by federal prosecutors named Sater as an unindicted co-conspirator, and prosecutors also disclosed that he had been convicted in a mafia-linked stock fraud scheme.

The New York Times revealed in 2007 that Satter was Sater and had historical ties to the Mafia. Trump pleaded ignorance.

"We do as much of a background check as we can on the principals," Trump said.

Garten said Sater was merely an employee at Bayrock, not an owner. "There would have been no reason to perform any diligence on Mr. Sater," Garten said, though Sater has described himself variously as Bayrock's founder and a top executive.

Sater publicly separated from Bayrock in 2008, but Trump named him a senior adviser and gave him an office in Trump Tower in 2010.

"I don't see Felix as being a member of the Mafia," Trump said in a 2013 deposition in a case over a failed Fort Lauderdale, Florida, condo deal in which Sater had been involved. "I don't think he was connected to the Mafia."

"Do you have any evidence or documentation to back that up?" the lawyer taking the deposition asked.

"I have none," Trump responded. Trump said he did not recall having asked Sater about it.

Trump appeared on stage alongside E.J. Ridings, billed by Trump Mortgage as formerly "a top executive at one of Wall Street's most prestigious investment banks."

Ridings' actual resume was more modest. He had been an entry-level broker at Morgan Stanley, for a total of six days, as Money Magazine first reported. Ridings resigned. He did not return a message from AP that was left on his cellphone or respond to contacts on active social media accounts.

Similar problems affected hires for Trump University, a defunct real estate investing seminar company. Though the instructors were supposedly "hand-picked" by Trump, he left the selection to others, who didn't successfully vet all of them, either.

Some of the instructors had filed for bankruptcy protection. Others were unqualified.

"He defrauded us, OK?" Trump said of one former instructor's declaration that he knew little about real estate.

Garten said Trump's organization performed background checks on every instructor, mentor and employee it hired for Trump University, and said some instructors were affiliated with a third-party licensee.

In the deposition, Trump was sanguine about his hiring process.

"In every business, people slip through the cracks," he said. "No matter how well-run a business, people come in and they're not good, and you wonder, you know, how did they get there, et cetera."

(This story has not been edited by NDTV staff and is auto-generated from a syndicated feed.)
Comments
Donald TrumpTrumps Baku project