Hours after putting Pyongyang on notice that it faced "fire and fury" over its weapons program, Donald Trump took to Twitter to proclaim that the US military's nuclear capability had become stronger since he came to power. 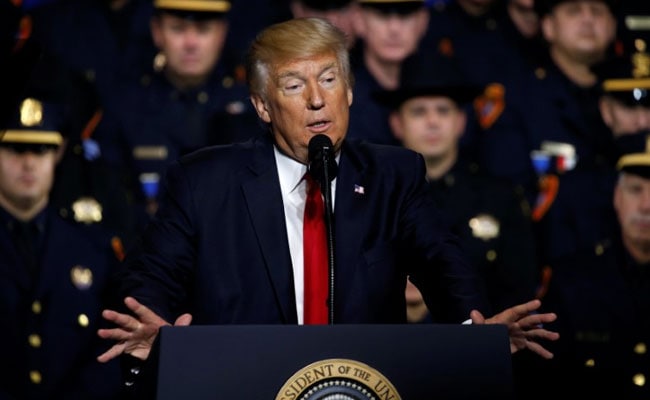 Washington: President Donald Trump said today the United States' nuclear arsenal was "more powerful than ever" in a fresh warning to North Korea over its repeated missile tests.

Hours after putting Pyongyang on notice that it faced "fire and fury" over its weapons program, Trump took to Twitter to proclaim that the US military's nuclear capability had become stronger since he came to power.

And after North Korea said it was considering a missile strike near the US Pacific territory of Guam, Trump's top diplomat delivered a message of reassurance to its residents and military personnel as he made a stop-over on the island.

Trump's "fire and fury" comments yesterday marked a sharp intensification of Washington's rhetoric over the North's nuclear and missile programs, triggering expressions of concern from China as well as from US allies.

But his early morning tweets -- written from New Jersey, where he is on vacation for two weeks -- dashed hopes of a cooling of tensions.

"My first order as President was to renovate and modernize our nuclear arsenal. It is now far stronger and more powerful than ever before," Trump wrote.

"Hopefully we will never have to use this power, but there will never be a time that we are not the most powerful nation in the world!"

Trump's language towards North Korea has become increasingly hard-edged since Pyongyang staged a successful Intercontinental Ballistic Missile test (ICBM) in July which put the US mainland in range for the first time.

Guam -- a 210-square-mile dot in the Pacific that is home to some 6,000 US troops-- would be a far easier target were North Korea to confirm its position as a fully-fledged nuclear power.

Hours after Trump's "fire and fury" comments, Pyongyang's KCNA state news agency reported that plans were being drawn up for missile strikes against Guam that could be put into action at "any moment" after Kim Jong-Un gives the order.

US Secretary of State Rex Tillerson, who refuelled in Guam on Wednesday while flying back home from Southeast Asia, said Trump was determined to send an unequivocal message to his North Korean counterpart.

"What the president is doing is sending a strong message to North Korea in language that Kim Jong-Un would understand, because he doesn't seem to understand diplomatic language," he said.

Tillerson said that he did not believe "there is any imminent threat" to Guam or other US targets and hoped that diplomatic pressure would prevail in the crisis.

"I think Americans should sleep well at night, have no concerns about this particular rhetoric of the last few days," Tillerson said.

Experts have long differed over the North's exact capabilities but all agree it has made rapid progress under Kim.

Last month, Pyongyang carried out its first two successful ICBM launches, the first -- described by Kim as a gift to "American bastards" -- showing it could reach Alaska, and the second extending its range even further, with some experts suggesting New York could be vulnerable.

The Washington Post quoted a US Defense Intelligence Agency analysis on Tuesday as saying officials think North Korea now has "nuclear weapons for ballistic missile delivery" -- including by its ICBMs -- making it a potent threat against neighbors and possibly the United States.

The Pentagon did not comment on the story, but the Post said two US officials familiar with the analysis had verified the assessment's broad conclusions, and CNN said it had confirmed the report.

The North's current ability to launch an accurate nuclear strike remains open to question, with analysts suggesting it has yet to overcome some major technical hurdles.

After Kim's second ICBM test, some experts said it appeared the "re-entry vehicle" that would carry a warhead back into Earth's atmosphere from space had failed in the intense heat.

US officials have repeatedly said this year that military action against the North was an "option on the table," though Tillerson said nothing had "dramatically changed" in the military equation in the past 24 hours.

The UN Security Council unanimously approved a series of sanctions over the weekend which could cost North Korea $1 billion a year, with even the regime's main ally China voting for the US-drafted proposal.

While the sanctions vote was seen as a diplomatic triumph for the US, there is widespread unease about the ramping up in tensions.

The North's main ally China warned against "words and actions" that would stoke tensions, while Germany said it was watching the "increasing rhetorical escalation" with concern.

France meanwhile praised Trump's "determination" in standing up to Pyongyang.

Republican US Senator John McCain said Trump should tread carefully when speaking about the North, telling a US radio station: "All it's going to do is bring us closer to some kind of serious confrontation."