Wildlife officials said 48 dead turtles and eight dolphins, as well as many small fish, had washed up on the country's western and southern beaches in recent weeks. 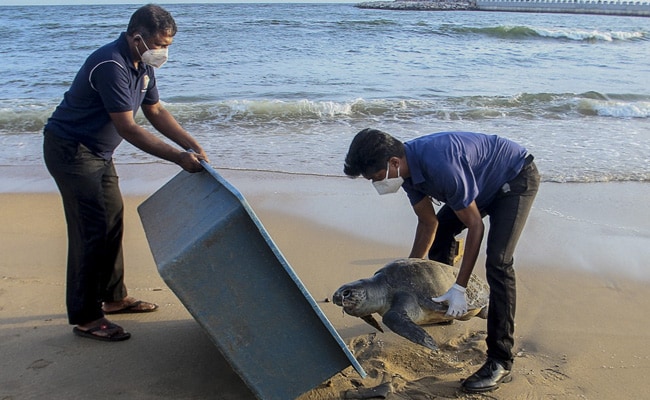 Dozens of turtles and dolphins were killed by intense heat and chemical poisoning from a container ship that burned for almost two weeks off Sri Lanka, authorities said Thursday.

The Singapore-registered MV X-Press Pearl has been partially submerged off the island nation's coast since early June after an onboard blaze released tonnes of plastic raw materials that swamped local beaches.

Wildlife officials said 48 dead turtles and eight dolphins, as well as many small fish, had washed up on the country's western and southern beaches in recent weeks.

"To see these images of dead turtles and dolphins is very distressing for our people," Environment Ministry Secretary Anil Jasinghe told reporters in Colombo.

"The carcasses that washed up soon after the fire had clear signs of burns from the intense heat of the ship."

Autopsies were being conducted to finalise the causes of death, he added.

Authorities were also probing the death of a 30-foot (nine-metre) blue whale off the Jaffna peninsula about 400 kilometres (250 miles) north of Colombo.

The whale washed up on the islet of Kayts on Tuesday, officials said.

The burnt out ship was known to be carrying 81 containers of hazardous chemicals, including 25 tonnes of nitric acid, when it caught fire.

Officials have said about 1,200 tonnes of plastic pellets and other debris scooped from beaches are being stored in 45 shipping containers.

They have also warned of the impact of microplastic pollution from the country's "worst marine disaster".

Sri Lanka is seeking $40 million in damages from the ship's operators X-Press Feeders.

Environmentalists are suing the government and X-Press Feeders for allegedly failing to prevent the disaster.