'Do It For Our Children,' Parents Plead At UN Climate Meet 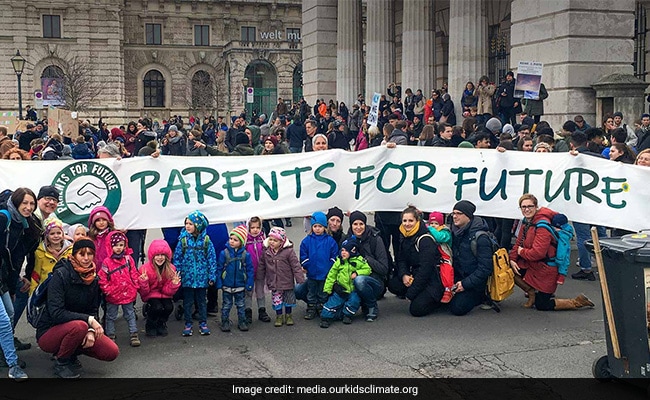 The 12-day UN talks are mired in the small print of the 2015 Paris climate treaty's "rule book".

Parents from around the globe Thursday said governments locked in negotiations at UN talks in Madrid must beat back the threat of global warming to "give our children the future that they deserve".

"Our children are being handed a broken world on the verge of climate chaos and ecological breakdown," they said in an open declaration from 222 associations in 27 countries.

"As parents, seeing this is agonising."

The student-led movement -- sparked by Thunberg's solo protests last year in front of Sweden's parliament -- saw millions pour into the streets worldwide ahead of a UN climate summit in September.

"Many of the delegates at COP25 are also parents and we appeal to these delegates in particular," the declaration said.

"Addressing the climate crisis is not the responsibility of our children -- it's our job as adults and parents to act."

The 12-day UN talks, underway since Monday, are mired in the small print of the 2015 Paris climate treaty's "rule book".

Despite a crescendo of public alarm, the world's major carbon polluters have shown little or no willingness to improve on carbon-cutting pledges that, collectively, are not deep enough to prevent catastrophic warming, say, scientists.

"Every person in the negotiations has a responsibility to act to ensure our children's rights are safeguarded, and to disregard vested corporate interests," said Isabella Prata, a mother of two, from Parents For Future Brazil.

Protecting future generations is a recurring theme at the talks, echoes by leaders and front-line diplomats alike.

"All of you, just like me, are so-called decision-makers, and probably have children or grandchildren who you love," he said in a scolding tone.

"Think about those children when you take a decision on behalf of your country," he continued. "Because our children will later think about us -- about what we did, or what we did not do."

Costa Rica's President Carlos Alvarado made it even more personal.

"I have a six-year-old kid," he said at a gathering of leaders from climate-vulnerable nations. "If we are not courageous enough to take action in these weeks, we will not only be failing me and my kid, we will be letting down humanity."

Earth's average surface temperature -- which has already gone up more than 1C -- are on track to rise another two or three degrees, even if nations keep their Paris treaty promises.

"At our current rate of emissions, we are dangerously close to reaching tipping points which could unravel human civilisation within our own and our children's lifetimes," the declaration said.

"We are at a turning point in the story of our species and you, the delegates of this influential UN climate summit, have an opportunity to choose what happens next."

"We know that you can and we trust that you will."